All eyes on the runaway nether world train 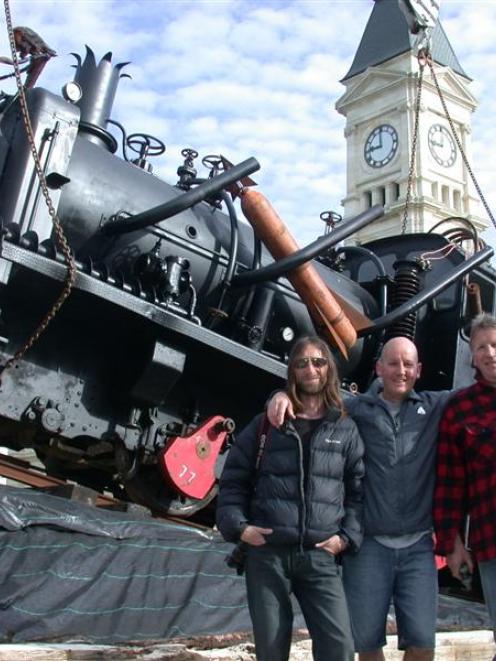 The full-sized, 19-tonne diesel locomotive has been turned into a Steampunk creation, a massive attention-grabber for the "Steampunk: Tomorrow As It Used To Be" exhibition which opens today at the Forrester Gallery.

Instigated by Brian de Geest, Jack Grenfell and Don Paterson - with help from Gillies Metaltech's Don Snow, the Alliance Group's Pukeuri works and other friends - the Steampunk creation was a well-kept secret, despite site preparations in front of the Forrester Gallery this week prompting all sorts of rumours.

Even the laying of railway tracks on a huge mound of earth and the installation of battered crossing lights gave no hint to the size of the creation that appeared yesterday, which needed two cranes to hoist it into place.

And Mr de Geest promised more surprises to come from the locomotive, especially at night.

The idea evolved from "too much caffeine at Steam", an Oamaru cafe. Mr de Geest had bought the diesel locomotive and carriage from Glenavy, where it used to be a cafe.

A Steampunk enthusiast, last year he created a futuristic tractor which, along with a giant motorbike, formed a display outside the Forrester Gallery at the inaugural Steampunk exhibition. Both of those attracted a lot of attention, and are now in the historic precinct.

Developing the concept for the locomotive and then creating it started just after last year's exhibition.

While its sheer size initially grabs attention, closer inspection reveals a myriad details and almost individual Steampunk creations that make up the whole.

Rocks are to be added to give the impression the train is bursting out from the ground.

The creation, which does not have a title, originated "from a bad place down there", creating the impression of a runaway from hell bursting from the ground. It will be on display for the exhibition until December "and possibly longer", he said.

After that, Mr de Geest is not sure what will happen to the locomotive, but hopes it can find a permanent home somewhere in Oamaru or at the Steampunk Headquarters on Humber St.