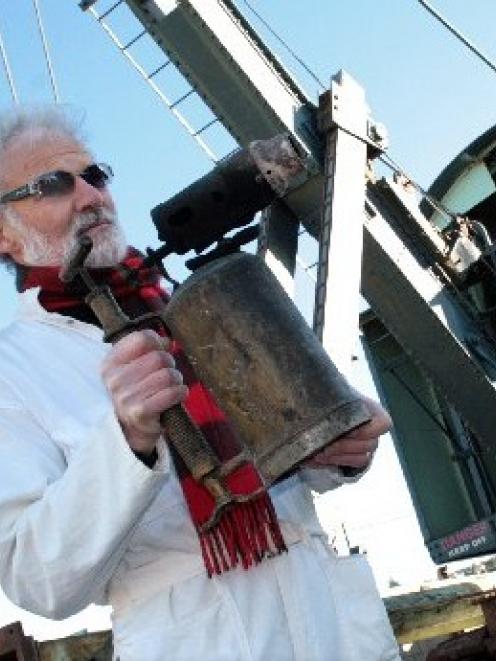 Lloyd Smith is waiting for others to join him in Dunedin's latest club, the Gasworks Steam Punk Society. Photo by Dan Hutchinson.
Weird and wonderful steam-powered machinery will be coming alive at the old gasworks if a handful of inventors get their way.

Dunedin's newest club is still in the concept stage but when the Gasworks Steam Punk Society gets going next month, an alternative future lies ahead.

Steampunk originated in the 1970s and 80s when a few science fiction writers started basing their stories on fantasy worlds written from a Victorian perspective about a future based on steam power.

It has developed over the past three decades into a popular subculture with its own fashion and fantasy, based on a philosophy that rejects today's technology in favour of an alternative future.

Now, a Dunedin group wants to breathe life into the principles of steampunk with a club dedicated to inventing and restoring steam-powered devices.

Dunedin Gasworks Museum Trust members Ann Barsby and Lloyd Smith say they do not want to compete with the thriving Oamaru-based League of Victorian Imagineers group, where the steampunk philosophy is already alive and well.

Mr Smith, also chairman of the Southland-Otago branch of Engineering Heritage New Zealand, said there was a saying that steampunk was "the future as it used to be".

"This is a more industrial [group] - the industry, the power, the steam," Mr Smith said.

He said the group was hoping to get Dunedin's creative minds together to dabble in the super-heated world of steam-driven inventions and would be holding a public meeting for interested people.

Mrs Barsby said a steampunk group would be a good fit with the engineering facilities and the ambience of the old gasworks, so it was just a matter of getting like-minded people together.

She said each year they would hold a steampunk event to display the inventions to the public.

People interested in inventing with steam should stoke their enthusiasm at a public meeting at the Dunedin Gasworks Museum in South Dunedin on July 3 at 3pm.

Anyone who is interested in viewing the Dunedin Gasworks Museum can do so on the first and third Sunday of every month from noon to 4pm.