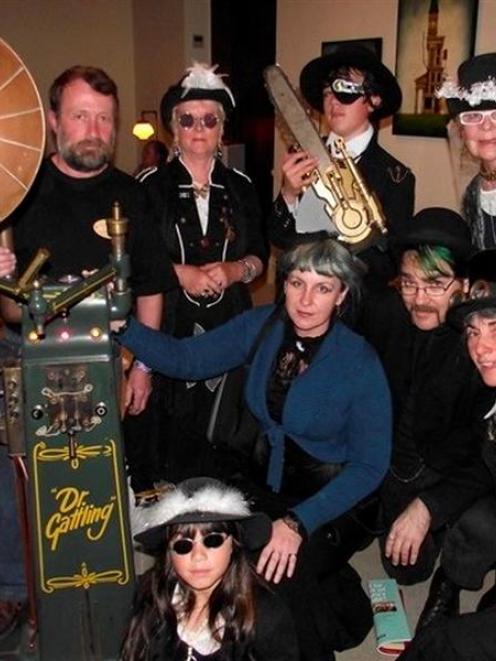 Steampunk Oamaru meets Steampunk Melbourne (rear, from left) Peter Fleury, of Dunedin, Helen Wilson, Bryce Taylor and Barbara Chapman, all of Oamaru; (front, row, from left) Nathalee Taylor, of Dunedin, Cassandra Edwards and Jeremy Byrne, of Melbourne, and Helen Jansen, of The League of Victorian Imagineers, from Oamaru. Photo supplied.
The record-breaking Steampunk exhibition at the Forrester Gallery in Oamaru has attracted international attention, and organisers of a similar event in Melbourne want to borrow some of its exhibits.

"Steampunk: Tomorrow as it used to be" opened on October 23 and closed on Sunday, having had more than 11,000 visitors.

On Saturday and Sunday, 562 people visited the exhibition, as a flurry of Oamaru residents and some from further afield caught the last days of the hugely successful event.

Even yesterday, people were still visiting the gallery to see what remained of the exhibition - some exhibits are being kept upstairs.

The 11,000 visitors are the equivalent of 90% of the population of Oamaru and half the total annual number of visitors to the gallery.

Many people came from other parts of New Zealand to see the exhibition and several stayed the night.

Local residents and business people felt that had been good for the town.

"This is quite wonderful and it's all good for our district," Waitaki Mayor Alex Familton said.

Brian de Geest's full-sized steam locomotive outside the gallery attracts crowds of local people and tourists every night to watch it light up, make chilling whistles, eerie chuffings and the skeletal driver laugh dementedly at his audience.

Initiated by The League of Victorian Imagineers last year, the event has almost doubled its visitor numbers in only 12 months.

Last-minute visitors and leaders of a steampunk movement in Melbourne, Cassandra Edwards and Jeremy Byrne, were impressed and said many of the exhibits were world class. They want to borrow some for their exhibition in Melbourne over New Year.