Full Steampunk ahead this Sunday 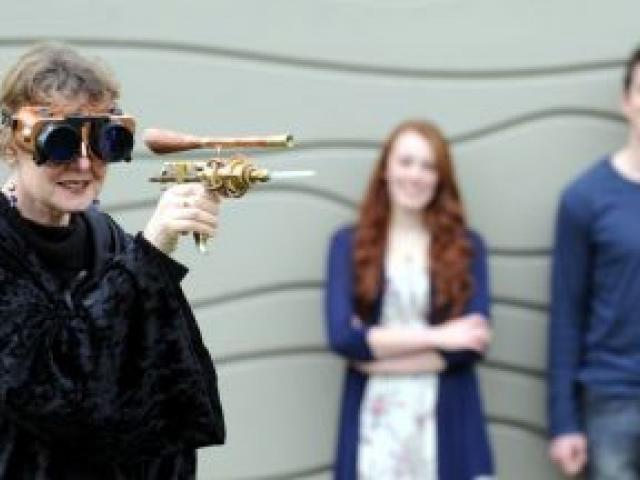 Bayfield High School literacy teacher Jenny Powell models a steampunk costume yesterday, watched by pupils Katie Day and Sam Arnold (both 17). Photo by Peter McIntosh.
Steampunk is gathering steam in Oamaru. A fashion show and a gala ball this Sunday are set to exceed expectations and trump last year's inaugural events, and are attracting attention from throughout New Zealand.

Year 13 mechanical engineering pupils at Bayfield High School in Dunedin have been making steampunk goggles out of aluminium, leather and translucent acrylic sheet for the Steampunk Fashion Show in Oamaru.

Steampunk was conceived in the late 1980s and is inspired by Victorian science fiction.

The League of Victorian Imagineers brought the genre to Oamaru in November 2009 with an inaugural Steampunk exhibition at the Forrester Gallery as part of the Oamaru Victorian Heritage celebrations.

It followed that up with the inaugural Steampunk fashion show and gala ball in June last year, and an even more successful exhibition again in November.

On Sunday, the league stages its second fashion show at the Oamaru Opera House, and a gala ball at night in the Scottish Hall. Already, the 120 tickets for the ball have sold out.

Demand for tickets for the fashion show at 2pm have been so strong - 200 sold by yesterday - organisers have opened the upstairs dress circle in the auditorium.

One of the organisers, Helen Jansen, yesterday said fashions entered for the show were also up on last year, the 33 almost double the inaugural entries.

"It's shaping up to be a spectacular event," she said.

About 30 pupils and two tutors from a Steiner School in Australia will be at the show with an entry. Other contestants are from Auckland, Rotorua, Christchurch, Dunedin and Tapanui, and will show alongside local entries.

Garments in the fashion show must be based on the Victorian genre and have a functional science-fiction component.

Entries must include the story behind the costume and character wearing it.