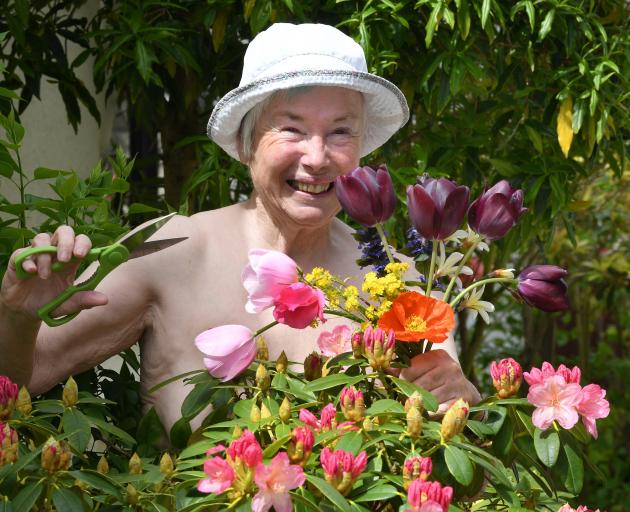 Gillian Vine in her flower garden on National Nude Gardening Day. PHOTO: STEPHEN JAQUIERY
One of New Zealand’s most celebrated gardeners gardened in just his boots and a sunhat.

Douglas Cook planted the arboretum at Eastwoodhill near Gisborne between 1910 and 1965.

He was also a founder of the significant rhododendron garden at Pukeiti, near New Plymouth.

And he gardened in the nude.

So when Otago Daily Times garden writer Gillian Vine stripped off for National Nude Gardening Day on Saturday she said she was in very good company.

"There’s a marvellous photo of him, full frontal in his garden, absolute starkers," Ms Vine said.

She said she was not a naturist but celebrated nude gardening on Saturday as a fun way to mark the end of National Gardening Week, which ran from October 18 to today.

In the northern hemisphere, World Naked Gardening Day occurs in May each year, but New Zealanders have adapted and adopted their own National Nude Gardening Day during Labour Weekend.

Ms Vine (77) said while Dunedin weather was none too conducive to gardening in the nude, when the weather was right, she was game.

"I’ve reached the age where I’m just a slab of meat and not very body conscious," she said.