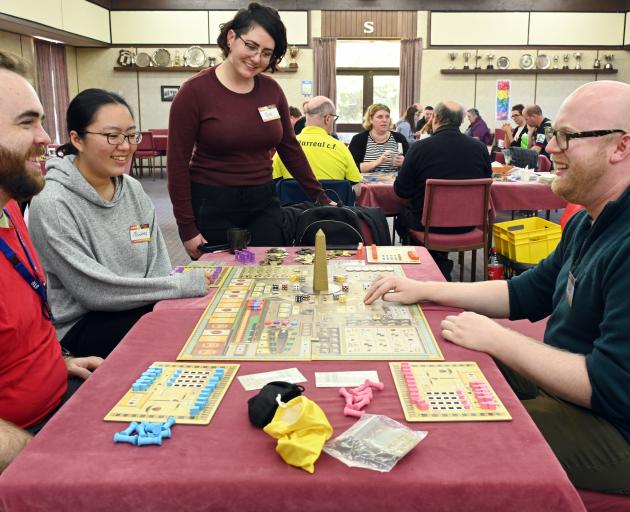 Chris Hay (right), of Dunedin, teaches Tekhenu to board game enthusiasts (from left) Matt Brindley, of Hamilton, Miname Yoshida and Evie Mete, both of Dunedin, at Board Games by the Bay held at the Bridge Club in Dunedin. PHOTO: LINDA ROBERTSON
Mobile phones may have taken a monopoly on the games industry, but people young and old are scrabbling to return to board games.

Board gamers of Dunedin flocked to the Otago Bridge Club over the weekend to discover new games and meet new people.

Co-organiser Jason Clague said Board Games By The Bay was a welcoming and inclusive event for gamers who want to share their common interest.

Those interested in exploring what the world of table-top gaming had to offer could try out new games with the help of a volunteer instructor, he said.

It was the first time the event had been held in Dunedin, but it had been running since 2011 across New Zealand.

There were many different games people had not heard of, he said.

"It’s not just 25 versions of Monopoly — there is so much more variety."

Local enthusiasts lent their games for the weekend, contributing to more than 160 games available at the event.

The games were organised by average play time and player count, so groups could easily find what type of experience they were looking for, he said.

"If you come in here and can’t find a game to play, I would be surprised."

The event featured tournaments with prizes for those who wanted to play on the competitive side of things, he said.

She said the event was really good and she was glad they decided to bring it to Dunedin.

Killian said a lot of the games looked interesting, and he was excited to try them out.