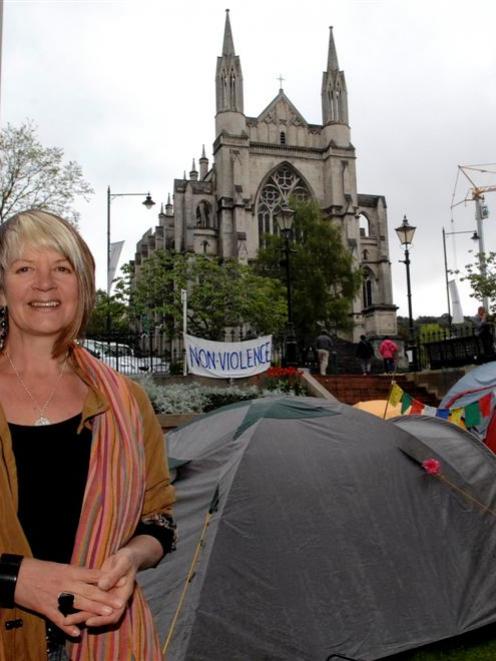 The celebrant has organised an Occupy in Silence sit-in, to be held in the lower Octagon from 10am to 11am on November 13.

She wanted the Dunedin community to show support for the principle of "equity for humanity".

She was part of the camp during the day, but after four nights in a tent, she could no longer take the "sleep deprivation".

"I'm middle-aged and I wanted to make sure my generation was represented ... [but] it's the most horrible experience I've ever had," Ms Crampton Smith said.

The moment the bar noise stopped, the street cleaners started up, and then the birds.

"Early Sunday morning, I tackled a roaring bull of a man, who was about to stampede through the camp ..." she said.

She had also witnessed a protester being head-butted, people "body slamming" tents on Saturday afternoon, and people calling the group "bums and bludgers".

Ms Crampton Smith believed the protesters had a "message that was hard for some people to comprehend", as they thought the group was anti-capitalism, when it was really seeking an alternative form of capitalism.

"We don't have the answers, but we are asking the questions."

She joined the protest because of the growing inequity between the rich and poor and the "grossly disproportionate" distribution of resources.

However, she knew the occupation of the Octagon was "a bit alienating", and so came up with the idea of a silent occupation which would be more "accessible and approachable".

As the president of the Dunedin Theosophical Society, she had "an interest in spiritual wellbeing" and approached the city's churches and religious groups for them to network the idea.

As well as people sitting in the lower Octagon, she hoped others would be part of it during religious gatherings.

"It's lifting it above politics."