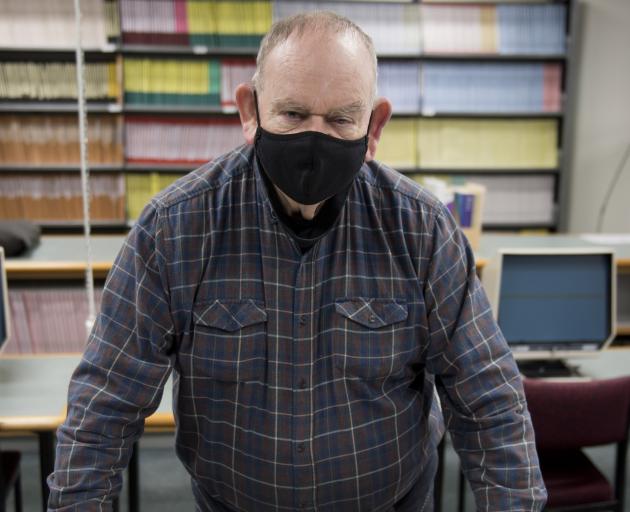 Writer Ken Catran with R Hudson and Company’s recently rediscovered log books, which he is consulting for a proposed television production on the Dunedin family’s history. PHOTO: GERARD O’BRIEN
A Dunedin story more than 20 years in the making is one small step closer to being told.

Mr Hanlon’s wife, Polly, was the daughter of Richard Hudson, founder of the Dunedin biscuit-making firm R Hudson and Company.

Although Mr Hudson had only a peripheral role in the story Mr Catran was telling at the time, the writer noted that his life had the potential to be a drama in its own right.

When Hudson was founded, Dunedin was the economic and commercial powerhouse of New Zealand, and many names familiar to New Zealanders today featured in the family story, Mr Catran said.

Now, spurred on by the discovery of the log books of the company during the demolition of the former Cadbury factory, Mr Catran has dusted off the idea and was in Dunedin this week to consult archival material.

"Bruce Allpress (a Dunedin-born actor) played Richard Hudson in it ... and that was my first introduction to Dunedin and its history but I have remained fascinated by it.

"There is so much here which could be the subject of good drama or documentaries."

Whatever form the future television production might take were in the "exploratory" stages and Mr Catran said details of the project were confidential at this stage.

"People have put money up, but who is doing what is confidential to them."

The Hudson logbooks were among materials Mr Catran had consulted this week.

"Those minutes are somewhat dry and precise

... but you can imagine the boardroom dramas or the arguments or the stories behind the whole thing.

"It was an amazing company."