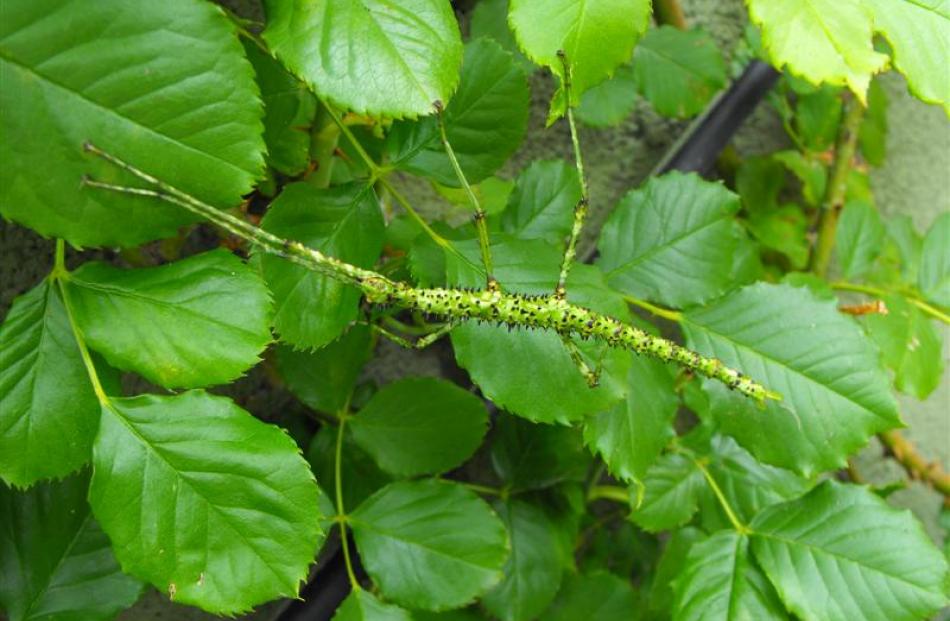 This prickly stick insect was found on a Dunedin rose bush this week. Photo by Alan Gilchrist.

Fairfield resident Alan Gilchrist had a close encounter with an unusual and prickly visitor this week, and has asked himself a few thorny questions.

Mr Gilchrist (75) noticed the longest and most unusual-looking stick insect he had ever seen, on one of his wife Jeanne's rose bushes.

The green stick insect's body was about 11cm long and seemingly covered in dark prickles or thorns.

It looked quite different from the slightly shorter common stick insect, which has a smoother body, although it can take many forms and colours.

"I just thought: 'This is a bigger one than I've ever seen before'," he said.

Accordingly, he took two digital photographs, which he emailed to the Otago Daily Times. They were then sent to Anthony Harris, an honorary curator of entomology at the Otago Museum.

He quickly identified the creature as the prickly stick insect, known formally as Acanthoxyla prasina.

This native insect is found throughout New Zealand, although it is less frequently reported than the "common" stick insect species.

Mr Harris had last seen a prickly stick insect about two years ago, and said this was a handsome specimen.

"It's always a joy to see one of our beautiful insects," he said.

Mr Gilchrist's two other thorny questions were: how such a sizeable and slow-moving creature survived predators, and how it managed to find a mate.

The thorns are apparently part of the camouflage, but prospective mates seeking less prickly companionship need have no fear.

This species is parthenogenetic, producing eggs without the help of a male, and no male prickly stick insects have yet been found.

Although native to New Zealand, the insect has also been accidentally introduced into England, where it breeds well. It eats leaves of a wide variety of plants, but does almost no lasting damage, he notes.

• Argosarchus horridus, New Zealand's largest stick insect, has a body up to 14.8cm long. With its legs spread out, it can fill the interior of a shoe box.