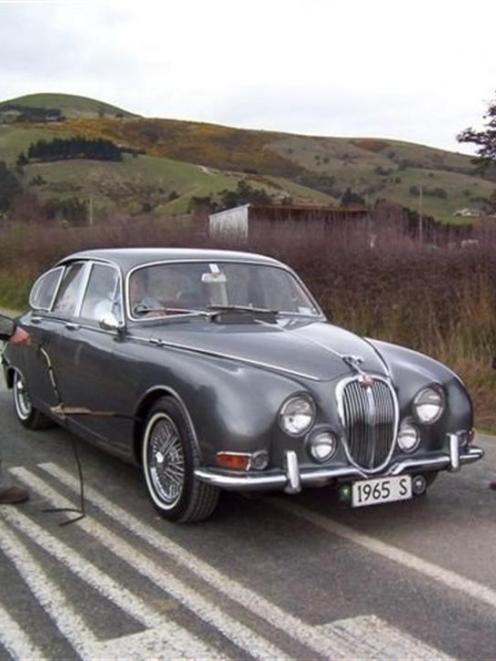 Steve McNulty's 1965 Jaguar is put to the test during the last quarter-mile sprint held along Gladfield Rd in East Taieri. Photo supplied.
Jaguar drivers from throughout Otago will assemble with their prized vehicles for a street race in East Taieri this weekend.

About 25 Jaguars of various models will be put to the test during a quarter-mile sprint along Gladfield Rd on Saturday.

Organised by the Otago Jaguar Drivers Club, the normally biennial race has not been held for three years.

Club immediate past president and race organiser Steve McNulty expected about 25 Jaguars to be raced and the Norm Masters Memorial Cup would again be awarded.

''It normally goes to the fastest vehicle, but it ends up being won by the same person every time. So, this year, the chief scrutineer will award the cup to the vehicle he considers to be the most interesting on the day, not necessarily the fastest,'' Mr McNulty said.

The race was only open to club members, of which there were about 80, but those interested in watching the action could be directed to safe viewing areas by marshalls at either end of the cordoned strip, he said.

A few specialty vehicles of different makes had been ''invited'' to the event, Mr McNulty said.

Vehicles would be raced one at a time on a quarter-mile stretch between Gladstone Rd and Bush Rd.

There were different categories for older models, not capable of reaching the same speeds as ''super-charged'' Jaguars, he said.

''We normally get cars from the 1950s right up to the latest offerings competing.''

• The event will run from 11am to 4pm, weather permitting, and if postponed will be held on October 5.