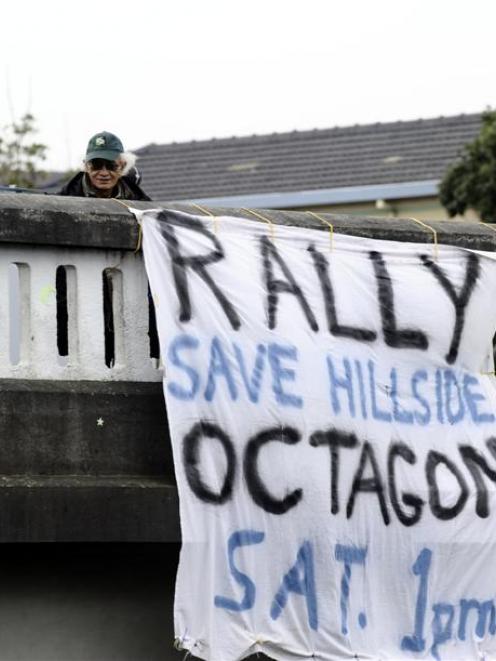 Dave Kearns and Mike Tahana hang a Hillside protest banner from the Roslyn overbridge yesterday. Photo by Gregor Richardson.
Kiwirail management is about to begin its final deliberations on which Hillside jobs are likely to go, after a consultation period with employees and union delegates ended yesterday - the eve of a public rally campaigning for a change of heart.

KiwiRail wants to cut 70 jobs from its nationwide rail manufacturing and maintenance operations, 40 of which are scheduled to go from Hillside Engineering.

KiwiRail chief executive Jim Quinn said the state-owned enterprise had a set process to follow as part of its final deliberations.

The process has been agreed in consultation with KiwiRail's staff and union delegates.

"We will consider all information, finalise our decision based on that input and then advise our people of the result," Mr Quinn said.

Asked if KiwiRail would consider scrapping the proposal to downsize its engineering operations workforce, Mr Quinn said the "feedback and information from the consultation process" would dictate any final decision.

"However, we must ensure we maintain the right resource levels mapped against the work demand." The Rail and Maritime Transport Union blames the proposed job losses on KiwiRail's insistence on outsourcing rail-manufacturing contracts for rolling stock and wagons to China.

RMTU organiser John Kerr said a recently commissioned comparison of contract tenders between the respective Hillside and Chinese bids was being submitted to KiwiRail as part of the consultation process.

Mr Quinn said unless there was a competitive alternative, KiwiRail would continue to source its rolling stock "as we are currently".

He declined to comment on whether any employees from the job-threatened workshops at Hillside and Woburn, in Lower Hutt, had volunteered for redundancy - a move the RMTU has asked employees not to make.

When asked if outsourcing rail-manufacturing contracts at the expense of New Zealand jobs had become a public relations disaster for KiwiRail, Mr Quinn said "commercial imperatives" were behind the move.

"The decision to buy our rolling stock is based on commercial imperatives where we have thoroughly considered the alternatives.

"We must buy well and deliver the sustainable railway for New Zealand - that is our priority," he said in a statement. KiwiRail was "very conscious of the effect these decisions have on our team," but the tough decisions needed to be made.

Should KiwiRail choose to abandon its job-cutting proposal, "it would be both correct and popular", Mr Kerr said.