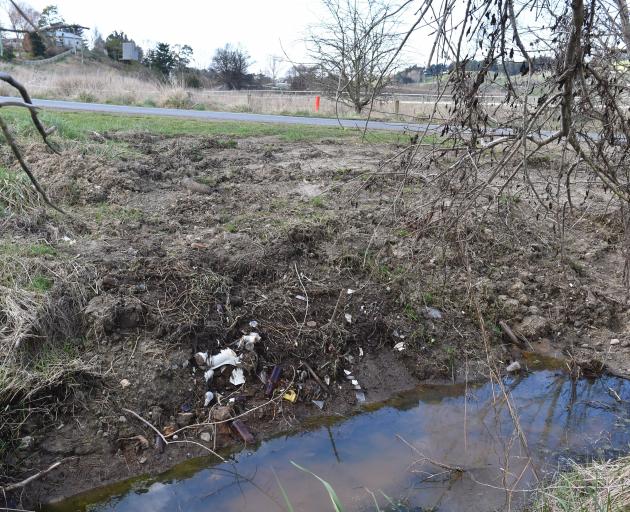 Ageing rubbish litters the edge of the Hawksbury Lagoon Wildlife Refuge. PHOTOS: GREGOR RICHARDSON
Fears have been raised that an old landfill is contaminating a Waikouaiti lagoon.

Hawksbury Lagoon Society chairwoman Ruth Ferguson said a landfill, understood to have closed in the mid-1970s, was now exposed and leaking into the lagoon.

‘‘At the old tip site the bank is eroding into the lagoon and rubbish such as bottles, old paint tins, tyres and metal are ending up in the lagoon,’’ she said.

‘‘The risk or level of chemical contamination is unknown.’’

The area she was concerned about was now under water, but it was exposed when the lagoon water levels dropped during the summer, she said.

She brought her concerns to the Waikouaiti Coast Community Board on June 23. There are concerns a former landfill is contaminating the Hawksbury Lagoon Wildlife Refuge.
And while the Dunedin City Council found and cleared refuse from the lagoon on that date, the rubbish that council contractors found was not related to the former landfill site, she said.

A council spokesman said on the day of the meeting, a blocked sewer was found to have overflowed on to land near the corner of the lagoon.

The contractors sent to the site found no sign of the overflow getting into the lagoon.

Further investigation showed there was a broken pipe and this was excavated and repaired.

As part of the tidy-up work, about 300mm of the existing ground level was scraped away to remove any contamination from the wastewater overflow.

No rubbish was found during this work, the spokesman said.

‘‘The rubbish reported to have been seen there may have been the result of illegal dumping.’’

However, an Otago Daily Times photographer who visited the landfill site yesterday said the rubbish he found appeared to be decades old.

Otago Regional Council compliance manager Tami Sargeant said the regional council had not had any recent involvement with the former landfill site, and it was not aware of ongoing pollution arising from it.

A Hazardous Activities and Industries List (Hail) register description stating that the site actively tipped rubbish into the lagoon might be outdated, she said.

The site was originally added to the list in January 2001, following a report commissioned by the regional council that classified the site as a low priority.

The landfill was thought to have operated between 1965 and the mid-1970s, when another tip opened in Waikouaiti.

An extension of the tip next to the lagoon was closed in 1968, covered, and planted in trees, according to a 2013 report for the Hawksbury Lagoon Society, Ms Sargeant said.

That report notes that debris from the tip had been exposed in the lagoon bank in the past, she said.

A Department of Conservation spokeswoman said the lagoon was administered by Doc, but the former landfill was situated on both public conservation land and city council land.

‘‘The [lagoon society] has been in touch with Doc,’’ she said.

‘‘Further work is required to understand what any next steps could be.’’