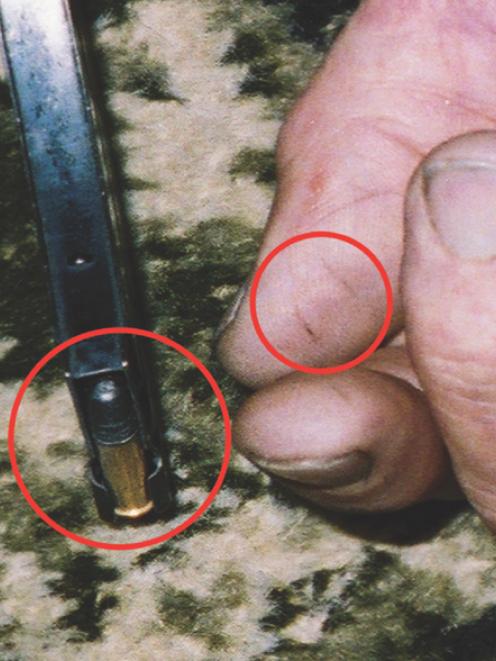 Lines on thumb and edge of magazine (circled). Photo from NZ Police.
New evidence has emerged which completely clears David Bain and he deserves an immediate pardon, his lawyer, Michael Reed QC, says.

A defence team inquiry has concluded marks on Robin Bain's thumb were left after he loaded a rifle shortly before his death.

Mr Reed said it showed Robin Bain murdered his wife and three of their children before shooting himself, leaving sole survivor David Bain to be charged with murder and imprisoned for 13 years. He was found not guilty at a second trial in 2009.

''The poor boy has suffered all these years with people still thinking he is guilty, which is a nonsense.''

The ''new'' evidence has been hiding in plain sight since the five members of the Bain family were slain in 1994. Parallel marks on Robin Bain's thumb were spotted online in an evidence photograph.

Testing by the defence team repeatedly matched them with imprints on gunpowder residue from the top of the rifle magazine, showing Robin Bain had reloaded the weapon.

''This new evidence shows Robin Bain was definitely the killer. It has to be that Robin Bain shot the family and himself.''

''I put it into the category of complete incompetence.''

Police had failed to adequately protect the scene, particularly in failing to wrap Robin Bain's hands to protect evidence, he said. It is believed the marks were brushed away when the body was moved, having not been recorded in the detailed autopsy carried out shortly after.

Mr Reed said had the evidence been found at the time, it would have focused attention where it should have been on Robin Bain.

''It is a slam-dunk that David is innocent and the father is the killer. You just only need say to the police `your case is in tatters; you've got it completely wrong','' Mr Reed said.

The case was presented last night on TV3's 3rd Degree, which produced a string of experts.

Gunsmith Robbie Tiffin said: ''If these marks are from a magazine and loading a magazine, then you're the guy who pulled the trigger. It looks to me like Robin Bain loaded [it].''

Waikato businessman David Giles discovered the marks when studying photographs from the case after reading an online discussion about the murders.

He recognised the marks instantly as matching the carbon tracks left on his own thumb when he was loading a magazine while rabbit shooting with a .22 rifle.

He emailed David Bain campaigner Joe Karam, who applied to the High Court for permission to carry out tests with the murder weapons, under Crown supervision. Repeated tests produced exactly the same markings and later tests matched the marks on Robin Bain's thumb with the top of the magazine.

A police spokesman said the New Zealand Police had not been approached by TV3 about the content of the show. He said no comment would be made until today - if at all.

Justice Minister Judith Collins is in the United States. A spokeswoman said she would not be watching the show.