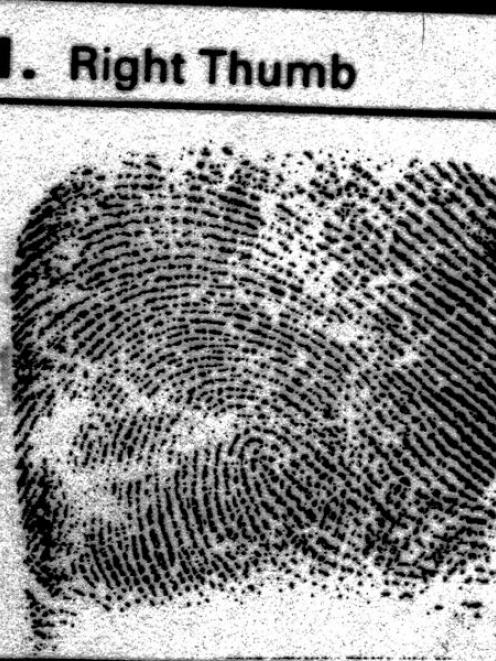 A thumbprint from Robin Bain, taken shortly after his death. Photo from NZ Police.
The theory that Robin Bain's fingers were marked by a gun was interesting but was not new evidence, Assistant Police Commissioner Malcolm Burgess said.

His comments follow a 3rd Degree documentary, aired on Wednesday night, detailing a defence team inquiry that concluded marks on Robin Bain's thumb were from him loading the rifle shortly before his death.

''It is an interesting idea when taken in isolation, but is no more than a theory when taken out of context of all the other evidence which has been presented to several courts,'' Asst Comm Burgess said.

He said police yesterday examined Mr Bain's fingerprints, taken after his death. These showed damage to his thumb, caused, police said, by cuts to his fingers in the same place as the marks in the photo shown in the TV programme.

Police released an image of the thumbprint yesterday, saying the marks could have been caused by the roofing and spouting work Robin Bain was doing on the family's Every St property in the days before the murders.

''Postmortem examination of Robin Bain's hands shows a number of minor abrasions and marks you would expect to find with someone familiar with manual work,'' Asst Comm Burgess said.

''The fingerprint, in my view, supports the statement,'' he told the Otago Daily Times last night.

''If there were cuts on his thumb, they would have been noted and photographed [by pathologist Alexander] Dempster.

''The police statement is typical police verisimilitude - i.e. sounds impressive but does not withstand scrutiny.''

Police said fingerprints did not show through cut marks, but did show through powder, like the powder that would come from a gun.

''Our fingerprint experts advise that [the absence of fingerprint markings on the thumbprint] is consistent with someone sustaining cuts or damage to the fingers prior to prints being taken, which would then affect the print image,'' Asst Comm Burgess said.

''Had these been powder marks or smudges as claimed, we would expect to see a complete fingerprint image,'' Asst Comm Burgess said.

He reiterated court evidence that the only identifiable fingerprints found on the firearm belonged to David and Stephen Bain.

''Police will continue to look at this issue to gain a better understanding of what this photograph may show.''

He slammed the people behind the show, who did not seek police comment and refused to provide details when approached by police the day before the show aired on TV3.

''Had they done so then, we would have pointed out that fingerprints had been presented in evidence and have always been available through the court to help them decide if their story stacked up.''

In a statement, a spokeswoman for Justice Minister Judith Collins said it was not appropriate for the minister to comment, as the matter was before the court.

Prof Kevin Dawkins, of the University of Otago's Faculty of Law, said the new evidence could be considered by Cabinet when it considered Mr Bain's compensation bid.

Prof Dawkins said an extensive paper several years ago recommended New Zealand institute a similar agency, but noted it ''has nothing to do with compensation''.