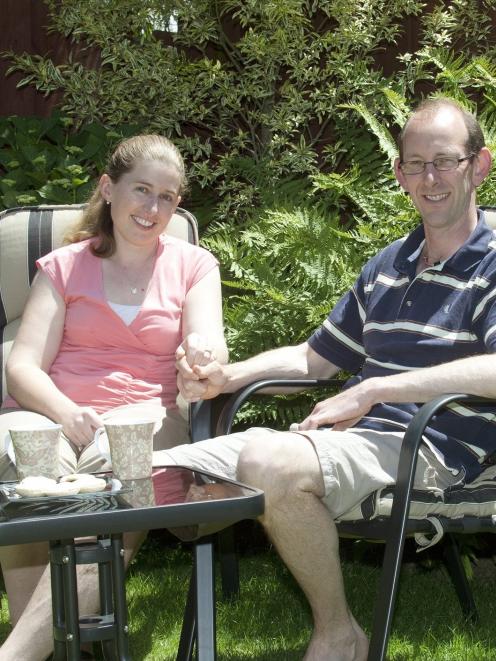 Ms Davies, a primary school teacher, arrived at the 2pm reception in a white stretched limousine with tinted windows.

Mr Bain drove himself to the venue in his own 4WD. He was dressed in a white shirt, cream coloured tie and waistcoat with a white rose.

He threw his hands up in horror when he saw media at the venue's entrance. Security was tight with a checkpoint set up at the front gates.

The ceremony is now over and the estimated 50 to 100 guests are understood to be at the reception.

The new Mrs Bain, a primary teacher at Cotswold School in Christchurch, and Mr Bain have not spoken publicly about their relationship.

Nor have they revealed where or when their wedding was held in a desperate attempt to keep it private.

Christchurch has been abuzz with rumour and speculation over when the 40-year-old would marry.

The small number of guests, including Mr Bain's closest ally and long-time friend Joe Karam, had all been sworn to secrecy.

Mr Karam, a former All Black, has given little away about the big day.

He said he was "looking forward to the wedding'' and was not the best man, but wouldn't provide any other details.

"I'm very supportive, but I've been asked by the family not to give anything away,'' Mr Karam said.

"They've decided to keep it private, so it's up to them.''

Mr Bain and Miss Davies had turned down some lucrative, "quite significant'' offers from women's magazines in favour of a private wedding, Mr Karam said.

"All the magazines were chasing David, through me, to sign him up for a story.

"David and Liz were offered big money by all the women's magazines but they turned it down because they wanted a private wedding,'' he said.

An Auckland source with knowledge of the industry said a women's magazine cover with photos and stories inside could attract $30,000-$50,000 for a high profile subject, such as Mr Bain.

Mr Bain was convicted in 1995 of murdering his parents and three siblings and spent 13 years in jail before he was acquitted in a 2009 retrial.

He is currently waiting to hear if he will be awarded compensation from the Government over his false imprisonment.

When the couple got engaged in September 2012, Mr Bain's then future mother-in-law Carolyn Davies said she was ``delighted'' to welcome him to the family.

Mrs Davies visited him in prison and billeted him during his second trial in the High Court in Christchurch, even making his lunch every day.