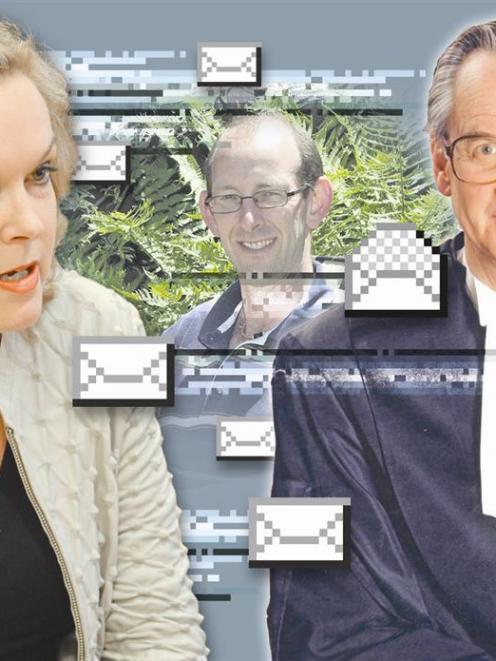 David Bain (centre) was the subject of a flurry of emails between Justice Minister Judith Collins and Justice Binnie.
The retired Canadian judge appointed to assess David Bain's compensation claim, noted the Justice Minister had ''strong views on this case'', released emails reveal.

Emails between parties involved in the compensation bid have been released by the office of Judith Collins following an Official Information Act request.

Those emails include an exchange involving retired judge of the Supreme Court of Canada Justice Ian Binnie and the minister's office.

In a flurry of emails late last year, Justice Binnie rejected a suggestion that the minister had raised the prospect of his report being peer reviewed.

''I do not recall any mention made at my meeting with the minister about `peer review'.''

Later in the same email he wrote, ''I appreciated that the minister has strong views on the case but I suggest that if a modicum of good will is to be shown it would be best shown on all sides''.

This email came after the prime minister announced that Justice Binnie's report would be the subject of a peer review.

''It lacked a robustness of reasoning used to justify its conclusions,'' she said in December.

Late last month, long-time Bain advocate, Joe Karam confirmed Mr Bain had filed a claim in the High Court at Auckland seeking a judicial review of the actions of the Justice Minister. The claim concerns her actions after she received the report from Justice Binnie, who found that on the balance of probabilities Mr Bain was innocent, and the process behind the report from Robert Fisher QC. Justice Binnie's claim he did not recall any mention of his report being peer reviewed during his meeting with the minister was rejected.

Ms Collins' office replied ''she considered you had gone beyond the terms of your instructions and that she intended to have your advice peer reviewed.

''The minister does not wish to make an issue of this point, it is of more importance to move forward with consideration of Mr Bain's application as swiftly as possible.''

Both Mr Karam and Ms Collins declined to comment to the Otago Daily Times on the released emails, as the matter was before the court.