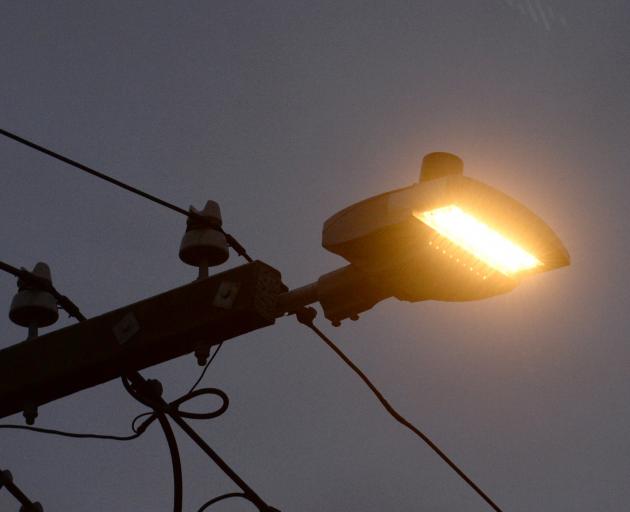 One of the new LED lights installed in Melbourne St, South Dunedin. Photo: Linda Robertson
Fresh concerns have emerged about Dunedin's move to LED street lights, as a $15 million project to introduce the new lights across the city takes another step forward.

It was announced on Monday that Telensa, a United Kingdom company with offices in the United States and Australia, would provide its smart streetlight management system to manage Dunedin's new LED lights.

A $15 million, seven-year contract - 85% of it paid for by the NZ Transport Agency - was awarded to Broadspectrum New Zealand in May, covering the design, installation, management and maintenance of the network.

Telensa's PLANet system has since been selected by the Dunedin City Council to manage the new lighting network.

That would include providing a central management application, allowing the council to remotely tailor individual lights to suit each location, the company said.

The new 3000-Kelvin LED lights would take up to two years to be introduced across the city, replacing the city's 15,000 ageing high-pressure sodium streetlights.

The new LEDs would be whiter and brighter than the city's existing amber lights, but shielded to reduce light spill.

Despite that, they have already prompted concerns from some about the potential impact on human health, wildlife and the night sky, as well as the loss of the city's existing vista of amber streetlights at night.

The council has already trialled the new lights on three streets in South Dunedin, and Mr Saunders said in April the public response had been ''positive''.

That was also the finding when the Otago Daily Times visited Oxford St late last year and spoke to residents who said the new lights were an improvement.

However, another Dunedin resident challenged that yesterday, sending the ODT a council summary of public responses to the trial lights.

The summary, which had been released following a official information request, included more than 30 responses, almost all of them opposed to the new lights.

The submitters' concerns included that the new lights would emit a colder, blue light that was ''blindingly bright'' and risked creating a health and safety hazard.

Introducing them could even leave the council liable for their negative effects in future, and the change should be reconsidered, other submitters argued.

Mr Saunders yesterday maintained the feedback from residents where LEDs were trialled had been positive, but acknowledged others had expressed concerns ''in a general sense''.

Mr Saunders is leaving his 'legacy' behind....cycle paths & street lights. Anyone looking down onto the test areas sees a dark hole. Now they want to destroy Dunedin's beautiful night vistas. These vistas are on the DCC's own home page for crying out loud.

Further, it will take approx 15 years to breakeven the additional costs of the LED lights. By then they will be breaking down because of Dunedin's AC current spikes & troughs which affects LED disproportionately vv sodium bulbs. This has not been thought out.

No mention of the economic benefits or otherwise of spending $15 million.

Mr Saunders has a legacy of damage at the DCC. The parks department has been decimated of talent due to his restructure. ORC staff should be concerned what they are about to get next

The concerns are actually a very specific sense, not a general sense. The LEDs have far higher intensity, harsh, sterile, eye-dazzling blue light like a football field or airport runway. Humans are tuned to yellower light in cyclic day-night sine-wave rhythms. They are like permanent daylight and will cause mental stress (with "unexplainable" cause) by interfering with day-night cycles of humans (& birds, plants). I suggest look up "led street lights mental illness". 3000k is the upper (current, official) "safe" limit. The brighter, intense blue-white colour reflects off the ground, cars, clouds, houses and nullifies any attempt at reducing light spill. The blue light causes pupil constriction so that unlit dark areas only appear darker. And they add even more WI-FI infrared-microwave radiation to the city! Guinea pigs is the term.
Mr Saunders has presumably heard all of this before? No offense but he seems like another Yes Man that can only follow the corporation-dictated version of reality.

Not well thought out, typical of the dcc.

NZTA, who are 85% funding the new lights say (on economic benefits & other things) : "LED lights are much cheaper to run, require less maintenance and have a much longer life time (typically 20 years compared to four years for high pressure sodium (HPS) lamps). International studies have found that LED lights help reduce urban road accident rates due to increased luminance from white lights, compared to the yellow light from HPS lights.

Converting to LED lighting has the potential to save up to 60% of the electricity consumed by conventional HPS lights. When these lighting assets are adaptively controlled through a centralised management system, for example through dimming, total energy savings can be up to 70%."