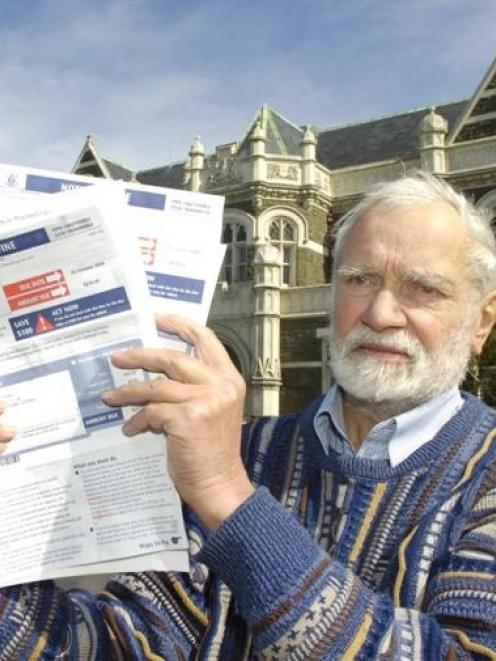 Retired Dunedin man George Morris is challenging fines on his van incurred in Otara. Mr Morris says he has not visited Auckland for "about 30 years". Photo by Jane Dawber.
It seems an open and shut case.

When George Morris parked his van in Otara in June he received parking tickets because the vehicle did not show correct licensing labels.

The problem, says the retired Dunedin man, is that he has not visited Auckland for about 30 years.

Mr Morris this month received notice fines totalling $460 had been processed in the Manukau District Court and he had until October 2 to pay.

Although he jokes about "being sent to Mt Eden or Milburn [prisons]", he is angry the process of challenging the fines has been time-consuming and has involved filling out several forms, a visit to a community law centre, and calling collections offices in Wellington.

He suffers from ill-health and says the stress has contributed to "the odd sleepless night".

"I've been waiting all winter to get out in the garden, but instead I'm ringing Wellington and running around town trying to prove I haven't been in Auckland for years.

"I have no intention of paying. I think it reflects very badly on the courts in Manukau that they are trying to get money out of people in Dunedin."

Mr Morris has filed a section 78b application to "correct irregularities in proceedings" through the Dunedin District Court.

The application was based on his claim he did not receive notification of fines proceedings either at his Woodhaugh home or Harington Point crib.

The "offending" vehicle, a Toyota Liteace, has been used to store bee-keeping equipment at the crib and has not had a warrant of fitness "for more than five years".

Ministry of Justice acting communications adviser Melanie King said 78b applications filed in the Dunedin District Court would be referred to the prosecuting authority, either police or council traffic wardens, and the local authority (the Manukau City Council).

Dunedin solicitor Len Anderson said a defended hearing to "set aside" fines following an unsuccessful section 78b application could cost more than $1000.

"Once they are posted, they are deemed to be served, so it takes the same amount of work to disprove the claim. The problem is it's very hard to prove a negative - that you did not receive something in the post.

"There are some areas where there is a high level of dissatisfaction within the courts, and one of them is parking tickets."

The Manukau City Council, which issued the tickets, did not respond to Otago Daily Times questions.

Parking infringement fines not paid by the due date may incur a $100 enforcement fee.

Enforcement action on fines includes seizure and sales of property and vehicles, or compulsory deductions from bank accounts or income, and arrest.