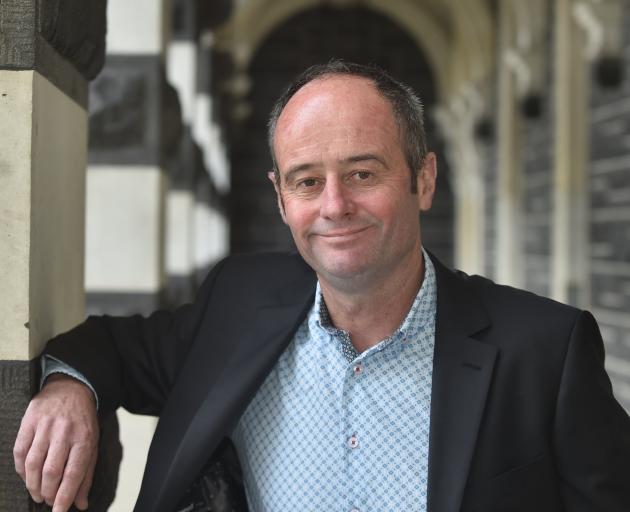 Dr Jim O'Malley says his skills are relevant to setting up a factory. Photo: Linda Robertson
Cadbury pledge drive founder Dr Jim O’Malley is having a crack at raising the money to set up a factory on part of the site. Reporter Eileen Goodwin profiles the Dunedin city councillor who has reason to empathise with laid-off Cadbury workers.

Moving house while trying to save chocolate production in Dunedin is not ideal timing, Dr Jim O'Malley says.

Sitting amid unpacked boxes, Dr O'Malley (53) said he hardly had time to talk to anyone on Thursday about his Cadbury pledge drive hitting the $5million milestone.

His phone was running hot with calls from media and business people about his push to save the Cadbury factory.

When the Otago Daily Times arrived, he had finished a call with an Australian representative of Mondelez, ahead of a crucial meeting on Tuesday.

''This next week's going to be really big.''

He would also meet a potential big investor.

It's a tricky business - there is the media spiel, short and snappy - but he has to show the company he understands the intricacies of quality control, re-engineering the site, capital-raising.

His background is in biotech and drug development, and he said his skills were relevant to setting up a factory.

Complexities include fitting out the warehouse with a new internal structure, refitting equipment, and replacing outdated equipment.

''The drying tunnel's made of wood - the quality control people don't like that any more.

''So you may have to get different drying tunnels built and made.''

He believes Mondelez might be persuaded to award him the third-party manufacturing rights even though he intends to use it as a stepping stone to own-brand chocolate production.

The key is to ''demonstrate to them you plan on not being in their space so you're not a threat''.

A decade working at a pharmaceutical giant taught Dr O'Malley how to deal with multinationals, and he empathised with Cadbury workers as he too was laid off.

He was a biologist in a Pfizer research and development team in Groton, Connecticut, whose members lost their jobs in 2007 amid a sweeping mass lay-off.

When companies acquired too many assets because of expansion and mergers, they shed staff and shut facilities - even profitable ones, he said.

It was the same year Dr O'Malley's wife, Lucinda, died from cancer, aged 42. The couple had three daughters - the youngest just 9 at the time.

Having a ''few things knock you around'' shaped your views on life and taking risks, he believed.

He was irked by Prime Minister Bill English's comment earlier this year that Cadbury workers would likely prove to be ''resilient''.

Until you had been through it, you did not understand how it felt.

He described redundancy as being like the 2009 film Up in the Air about a world-weary executive endlessly flying around the United States laying off workers.

''That's so real; that is exactly how you get laid off.''

The Pfizer people were bemused his one request upon redundancy was to keep a large collection of medical journal articles for future reference.

Multinationals had different ideals and values.

''Their world is different. It's not about community.

''No company is immoral, but almost all the big companies are amoral.

Dr O'Malley grew up on a sheep farm in the Grey Valley, on the West Coast, and studied in Dunedin, at the University of Otago, where he gained a doctorate in physiology in 1989.

He spent 25 years in the United States before moving back to Dunedin.

He was elected to the Dunedin City Council in 2016, and runs biotech firm Biocentrix.

As well as a decade at Pfizer, he spent seven years in academic fellowships at Ivy League universities studying neuroscience.

The Pfizer closure hit property values in Groton, and he lost a large chunk of his equity.

He ''quite literally'' had no money when he shifted back to New Zealand, and said he had only just been able to purchase a home after renting for four years.

He came home because his daughters were at an age where they would study and settle in America if he did not make the move.

During his last few years in the United States, he was involved in a collaborative venture to develop a new drug to promote bone healing.

He put $750,000 of his own money into the drug, and the next step was finding a drug company to buy the rights and do human trials.

The self-described ''disappointed Labour voter'' steered away from property speculation.

He said New Zealanders had few things to invest in apart from land and a ''gambling pit'' stock exchange.

He believed that was why his chocolate factory bid grabbed people's imagination.

''There's a sense out there now that this great experiment with New Zealand Rogernomics ... the sense is that it made some people money but it seemed to leave the economy weaker and society weaker and this is an opportunity to go back to a more traditional method of investing.''

Making a product and employing people was ''kind of old fashioned'', he said.

He had respect for workers' rights.

People's views on the venture had been mostly positive, but did to an extent come down to personal politics, he said.

Detractors included his fellow Dunedin city councillor, Mike Lord, who had taken to calling him ''the Milky Bar Kid'', and had made it clear he would not be pledging any money.

''Of all the councillors, he's the only one calling me the Milky Bar Kid.''

''There's a tendency inside a lot of societies, and definitely inside New Zealand society, to knock something down.''

Dr O'Malley had an early example of grassroots capitalism when he saw his farmer father and a friend raise the money to build the Kokiri freezing works in the 1970s when they were sick of sending their lambs over the hill to Canterbury.

As is so often the case, the West Coast works ended up in corporate ownership, he said, because later owners often forgot why the business was set up.

For the Cadbury bid, it might come down to whether Mondelez sees fit to support a community enterprise or squash a potential competitor.

Musing on the ways of multinationals, he said it was difficult to predict their actions.

Decisions were made in ''other continents''.

''It's like the weather, that's probably the best way to describe them.

''It's gonna blow a southerly whether you want it to be a hot day or not.''