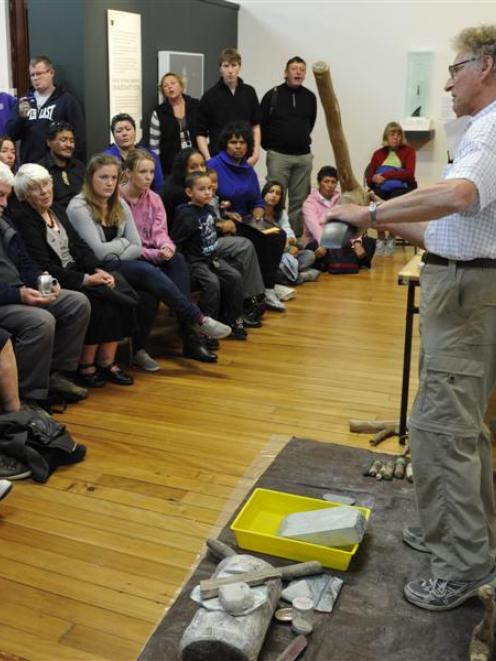 Gemmologist Russell Beck shows an audience at Otago Museum the mechanics of one of the adzes he has made in the traditional Maori style. Photo by Gerard O'Brien.
Pounamu is "not just a pretty stone" gemmologist Russell Beck told more than 50 people at Otago Museum yesterday in a demonstration about the properties of the stone and traditional Maori tool-making.

Mr Beck, of Invercargill, who is recognised as a world authority on jade, said unlike some cultures using stone which "got into a bit of a rut", Maori had wonderful skills at using technology to improve what they were doing.

The technology developed "far exceeded" other areas of the Pacific and probably the rest of the world, he said.

He did not consider anybody surpassed Maori for using technology to make things out of wood using stone.

Mr Beck, who has made a selection of tools himself in what he believes was the traditional way, said the adzes Maori used for chopping down trees would have been easier to use and require the removal of less wood than heavy stone axes common in Europe.

He suggested it would be good to see woodchopping games revived testing the stone adze against the axe, to see which got through wood first.

Pounamu was a reasonably hard substance, but it was incredibly strong.

A big boulder of it would be strong enough to balance a ship on without breaking.

"It's a wonderful material to have in a stone-based culture - in fact, it's better than metal."

Among the more unusual items Mr Beck has fashioned are a xylophone, nails and drill pieces.