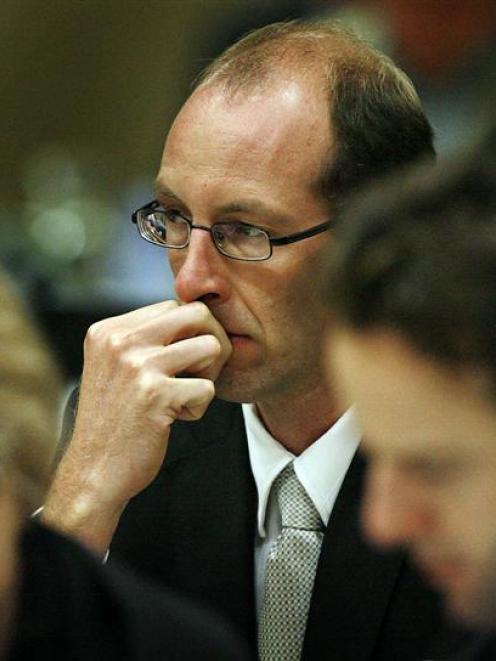 David Bain listens to proceedings while defence lawyers, Helen Cull QC and Matthew Karam, confer.
David Bain's mother, Margaret, did not die immediately from the single gunshot wound above her left eye, but survived long enough to inhale blood into her lungs, a Christchurch High Court jury was told yesterday.

Marie Fitchett was a detective in Dunedin on 1994 when 50-year-old Margaret Bain, her husband Robin (58), daughters Arawa (19) and Laniet (18) and son Stephen (14) were all shot to death in their Every St home.

As officer in charge of Mrs Bain's body, she was present during the post-mortem examination and recorded some of what the pathologist said during that examination.

One of the comments she noted was that Mrs Bain "lived long enough to have inhaled blood into her lungs", that her lungs were "heavy", and she "survived some time before death", Miss Fitchett said in response to a question from defence counsel Helen Cull QC.

David Bain (36) is charged with murdering his mother, father and three siblings early on June 20, 1994, then making it look as if his father shot the family and committed suicide.

He denies the charges, saying he found the family dead when he returned from his paper round.

At his retrial he is represented by Michael Reed QC, Helen Cull QC, Paul Morten and Matthew Karam.

Crown counsel at the 12-week hearing before Justice Graham Panckhurst and the jury are Kieran Raftery, Cameron Mander and Robin Bates.

In her evidence late yesterday, Miss Fitchett said she went into Margaret Bain's bedroom at 3.20pm on the day of the murders.

She saw "a large female lying on her back", with one arm above the bed covers.

There was a small round wound above the left eye, just below the eyebrow, and blood was running down the left side of her face from her nose and from the wound.

The body was removed to the mortuary, where the postmortem examination was carried out, Miss Fitchett said.

A bullet fragment was removed from inside the skull.

Jurors were shown a picture of the bullet fragment, as well as photographs of the dead woman, her face blood-covered as she lay in bed, and at the mortuary after the blood had been removed.

To Ms Cull, Miss Fitchett agreed Mrs Bain's waterbed was still warm when the witness was in the bedroom.

She said when the pathologist moved the lights above Mrs Bain's bed, some moths and silverfish fell out on to the bed.

She marked the position the body was in before it was removed.

A plastic bag was placed over the head and the body was placed in a full body bag before being removed on a gurney.

Earlier in the day, former detective Kevin Anderson showed the jury a blood-splattered green curtain from the lounge where the body of David Bain's father was found near a rifle.

The curtain was over an alcove where police found a computer with the message "Sorry, you are the only one who deserved to stay".

As he removed the green velvety-looking curtain from a large paper rubbish sack, Mr Anderson pointed to the blood splattered area on the lower part of the curtain.

The area was 9cm wide, he told the jurors.

In the alcove, he found a cartridge shell on the floor, near the leg of a chair.

In other parts of the lounge, he saw a bullet lying on the floor near the rifle butt and two blood spots on a coffee table.

In David Bain's bedroom, which he examined with Detective Jenepher Glover, Mr Anderson said he seized a tea bag box containing 17 boxes of Stirling .22 ammunition, another box with a variety of brands of ammunition and a carton with seven boxes of Whisper sub-sonic .22 ammunition, which had hollow points.

In a bread bag in the wardrobe, he found 66 rounds, the lead ends of nine apparently damaged and, in a 51-cartridge capacity ammunition belt, there were 47 bullets, with eight on the floor in front of the wardrobe.

All those items were seized, as was an empty bullet container, two parts of a trigger lock found separately on the floor, a firearm's licence in the name of David Bain, a receipt for the rifle and a cardboard target with five round red marks on it.

The trial goes into its 10th day of hearing today, with evidence from 39 of the Crown's 150 witnesses having been heard.