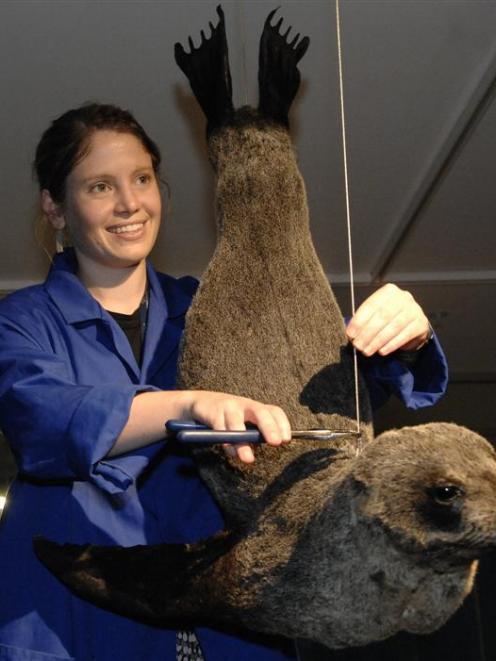 Otago Museum natural science research and interpretation co-ordinator Lucy Rowe helps prepare a New Zealand fur seal for an Otago's Ocean display. Photo by Linda Robertson.
Tense final preparations are being made at the Otago Museum for the opening today of "Otago's Ocean", a display exploring stories of ocean life, from tidal zones to the deep sea.

The new 70sq m display area, which also focuses on underwater landscapes and life on the sea shore, is a permanent addition to the museum's Nature Galleries.

This display section completes the revitalisation and redevelopment of the museum's overall Nature Galleries, an area previously known as "Extinction and Survival".

Lucy Rowe, the museum natural science research and interpretation co-ordinator, said the ocean section would help raise community awareness of the ocean near Otago, and of creatures living in the depths and in nearby coastal areas.

"It provides a snapshot of Otago's marine environment and completes the story of Otago's ecology in the Nature Galleries," she said.

The new display will be home to a young fur seal, whose lively swimming style is displayed through naturalistic taxidermy.

Also featured is a rare, 2.8m-long leopard seal, one of the most ferocious predators found in southern waters, and now one of the museum's largest mounted specimens.

Recently acquired, this is the only leopard seal in the Otago Museum collection.

The section will also feature 84 other specimens, including a spiny rock lobster, and a squid and a humpback whale.

The earlier revitalisation of the rest of the nature galleries had been completed in June 2009.

Through that process, traditional gallery favourites, including the popular insect dioramas, and the historic but still "arrestingly realistic" moa models, were retained, but new stories and specimens were added to provide more focus on the special nature stories of Otago, museum organisers said.

The display will be celebrated with a day of free, fun family activities at an Otago's Ocean Open Day tomorrow.

Highlights of that day will include an 11am talk by Ms Rowe about how the sea leopard found its way to the museum, a 1pm talk on Hector's dolphins by Jenn Turek and a 2pm discussion on "the remarkable character of Otago's ocean" by writer and conservationist Neville Peat.