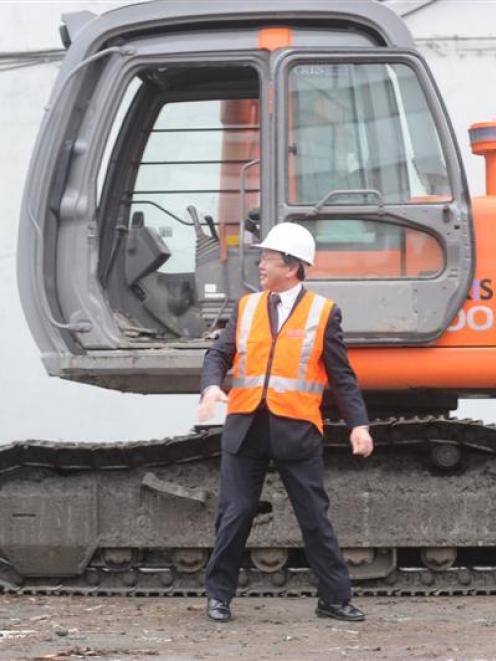 His first few seconds at the controls were eventful as he lurched his mechanical monster backwards and sent an assistant toppling from the machine in front of gathered media.

The spectacle at the Awatea St site also involved Carisbrook Stadium Trust chairman Malcolm Farry, and Hall Bros Transport Ltd, which has won the contract for demolition and recycling work.

Mr Chin gamely hoisted himself into the machine and received a few quick pointers from Hall Bros operations manager Nick McEwan, standing next to him.

Mr Chin then launched into his task with vigour, tearing at the reinforced concrete wall of the former Otago Freight Base office, one of 16 buildings to be pulled down to make way for the stadium.

When the concrete did eventually give up, the excavator lurched back with such force Mr McEwan lost his balance and fell.

Cat-like, Mr McEwan managed to land on his feet, and flash a grin in the direction of media, but appeared keen to keep his distance as Mr Farry took his turn.

Speaking to the Otago Daily Times, Mr Chin said it was the second time he had found himself at the controls of an excavator, after a similar operation to launch construction of Dunedin's Chinese Garden.

Asked how it had gone this time around, Mr Chin said: "I was scared."

He then added it was "quite a thrill being in the machine and knocking things over".

Mr Farry was equally impressed after his turn, declaring it "every little boy's dream".

Yesterday's publicity stunt had earlier got off to an inauspicious start, when delays in finding a suitable mechanical claw for the excavator prompted a Dunedin City Council staff member to comment to Mr Chin: "Is it this World Cup or the next one?"

Despite the glitches, Mr Chin said it was a significant day for the stadium project, more than two years before of its expected completion in July 2011.