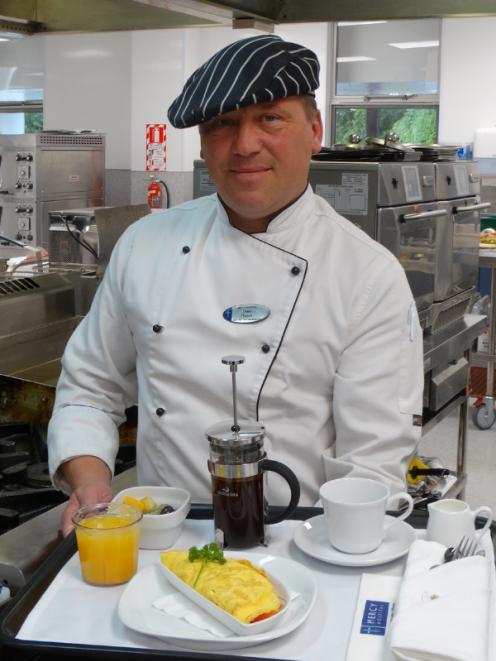 Signatories to the charter agree to work towards a series of principals around food, including actively supporting positive health and social outcomes, supporting a food-­friendly local economy, and protecting the environment.

Enterprise Dunedin Good Food co-ordinator Ruth Zeinert was impressed by the hospital’s long-standing devotion to many of the principles outlined in the non-binding charter.

These included sourcing local and organic food where possible, growing herbs, vegetables and fruit onsite, and investing in a tiger worm farm to reduce waste.
However, the most significant change had been last year’s introduction of a ‘‘room service’’ a la carte menu, which allows patients to order fresh-­cooked meals between 7am and 7pm.

Ms Wilde said introducing the new a la carte service last year had involved a major investment in equipment and was a significant commitment for kitchen staff, but had proven a great success.

‘‘Staff say it offers them better job satisfaction, and it has been very popular with our patients.’’

The menu was carefully worked out and monitored to ensure patients were receiving the nutrients they needed during their stay, and also helped with management of allergies and dietary requirements, she said.

Mr Whitney said people who were sick or elderly often wanted very different food from the likes of orthopaedic patients, and so a stock-standard approach to food would ‘‘miss the mark’’.

‘‘With our a la carte menu, people can order what they feel like, when they feel like eating, and so are much more likely to actually eat the food,’’ he said.

Ms Wilde said an unexpected bonus of the scheme had been a significant reduction in food waste.

‘‘Before we introduced the menu, I didn’t think we had a lot of food waste, but it has had quite an effect,’’ she said.

Mr Whitney said the success of the menu was a tribute to the efforts of staff, who had done a great job of supporting it.

Ms Zeinert said Mercy Hospital was a good example of an organisation that had a genuine desire to follow the principles of the Good Food Charter, and to give its patients the best experience possible.