More information 'would not have helped' hotel bid 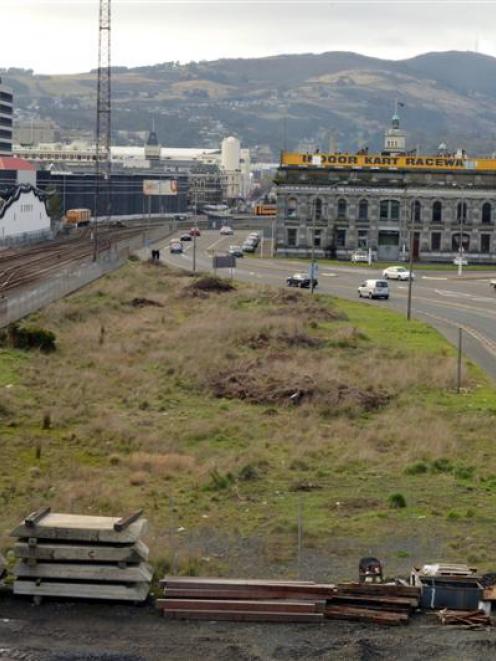 The site of the proposed high-rise hotel. Photo by Stephen Jaquiery.
The bid to build a $100 million waterfront hotel in Dunedin has been criticised for failing to deliver crucial information, but the man promoting the project says the information would not have helped.

The decision noted the hotel bid by Betterways Advisory Ltd contained ''a number of shortcomings'' and lacked any ''compelling'' landscape evidence showing the hotel would not damage the city's character.

The committee had requested five additional pieces of information after the first round of the consent hearing in December, but Betterways provided only three and declined to demonstrate the hotel's height or commission a report by a recognised landscape architect.

Cr Weatherall told media yesterday that was Betterways' right, but the lack of information counted against the hotel.

Betterways director Steve Rodgers defended the decision, saying the extra information would not have helped and the committee appeared ''keen to say no''.

He would not elaborate, and did not want to appear ''bitter and twisted'', but believed the committee's views on the legal tests underpinning the decision were ''a matter of opinion''.

''I think we presented the best case that we could. These are uncharted waters. This is the first high-rise building the city has seen.

''The council has come to its decision. Reading that decision, I'm of the view that the panel was keen to say no ... based on the evidence they heard.''

Despite that, he could not yet say if an appeal to the Environment Court would follow. Any decision was likely to take the full 15 working days allowed.

Betterways' bid, which began in May last year, would have seen the 96m-tall glass tower built on vacant industrial land at 41 Wharf St.

It would include 215 hotel rooms, 164 apartments and restaurants, bars and a swimming pool, spread over 27 storeys and a rooftop level.

The project attracted a record number of submissions - 507, with 457 opposed - for a public consent hearing in Dunedin.

Yesterday's decision said consent could not be granted because the project failed to meet key tests under the Resource Management Act.

Betterways had failed to show the hotel's effects would be no more than minor, or that it would not be contrary to district plan rules, and consent could not be granted unless the hotel met one of those two tests, Cr Weatherall said.

Despite that, the committee had gone one step further, by nevertheless considering wider planning issues arising from the hotel, and the project failed that test too, Cr Weatherall said.

Even the positive benefits it would bring to the city's economy - through investment and jobs - could not save it.

''We gave it the full nine yards, to put it simply,'' Cr Weatherall told media.

''It's not a decision that we would smile at. There is investment opportunity in Dunedin city. We understand the implications of those things, but we had a job to do.

The 127-page decision canvassed the views of submitters before scrutinising the key issues in detail.

In particular, it dismissed an argument by Betterways' counsel Phil Page, who maintained the hotel's height could not be considered because district plan rules for the industrial site did not include a height limit.

The committee found that was ''wrong in our view'', as the hotel would make a ''significant change'' to the city's character and landscape, meaning issues of height and bulk deserved the ''fullest attention''.

And, without compelling evidence from Betterways, the committee concluded the hotel's impact on the city's landscape would be more than minor ''and, probably, significant''.

The lack of geotechnical information was also a ''serious omission'', given the hotel would be built on reclaimed land subject to seismic activity, and more detailed information was needed to consider potential wind problems, the decision said.

Traffic and pedestrian problems had also not been fully addressed and, without a pedestrian bridge linking the hotel, city centre and waterfront, the hotel would effectively be left ''on an island''.

The decision did acknowledge the hotel would create jobs and other economic benefits, particularly for the tourism industry, improve the area and encourage more public use of the harbour side.

However, consent had to be declined despite that, as the committee was not satisfied the hotel's effects were fully considered and understood.

''The application suffered, in our view, from a lack of proper information.''

Mr Rodgers, although disagreeing with some of the conclusions, said the report appeared ''well-written and, on first reading, robust''.

However, he believed his team had done an ''excellent job'' in what were ''uncharted waters'', and denied taking a gamble by choosing not to provide some of the requested evidence.

''We think we gave more than enough evidence to support the council giving a decision in favour.''