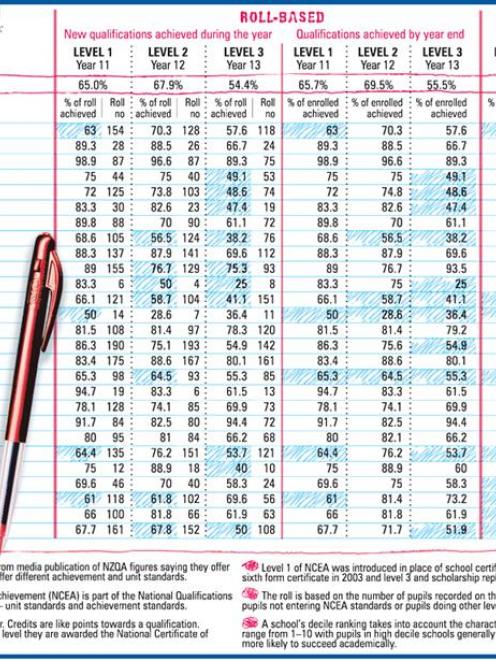 The number of Otago secondary schools failing to meet the national average pass rate in NCEA level 1 has increased significantly.

Of those participating in NCEA level 1, 77.4% of the pupils achieved the qualification.

Participation-based statistics only record pupils with the capacity to gain the qualification.

University of Otago College of Education associate dean Prof Jeffrey Smith said the number of secondary schools in Otago failing to match or better the national average of level 1 participation-based pass rates was nothing to be alarmed about.

He said the majority were clustered just below the national average.

Schools such as Maniototo Area School fell well below the national average, but that was not unexpected, he said.

"Some schools have very small numbers of pupils sitting NCEA level 1, and each pupil who fails affects the percentage more dramatically."

Participation-based pass rates in NCEA level 2 and 3 remain steady, 12 Otago schools failing to match or better the national average in level 3, and 10 schools in level 2.

The picture is similar to 2010, when there were also 12 and 10 schools respectively, which did not meet the national average.

Otago Secondary Principals' Association president and Dunstan High School principal Brent Russell said the downturn in the economy might be having a significant effect on NCEA level 2 and 3 statistics.

He said many pupils in the past went into jobs or apprenticeships instead of staying on in year 13, because they were perhaps less academically able.

However, with the New Zealand economy taking a hammering in the past three years, fewer jobs or apprenticeships were available, and many pupils had decided to stay on at school and attempt NCEA level 2 or 3 while doing Gateway programmes.

"As long as a student achieves their potential, that is the main thing.

"An NCEA qualification may not be the preferred pathway for many students.

"Many students choose to take courses which lead to employment rather than continue their academic career."

Mr Russell said NCEA results were just part of the overall picture of how well a school's pupils were achieving.

"There will be many students in these statistics that will never, ever be able to gain an NCEA qualification.

"And by the same token, there are students who are sitting NCEA levels ahead of their time."

NZQA deputy chief executive, qualifications, Richard Thornton said the statistics were developed to assist schools to plan their teaching and learning programmes, and for parents to be better informed about their child's progress.

Use of these statistics in any other manner should be done with care, he said. "People should keep in mind that schools tailor their delivery of courses and qualifications for their students' individual learning needs.

"Factors such as decile, roll numbers and courses offered will influence a school's statistics."

The annual report, NCEA and New Zealand Scholarship Data and Statistics (2011), would be released later in April, he said.