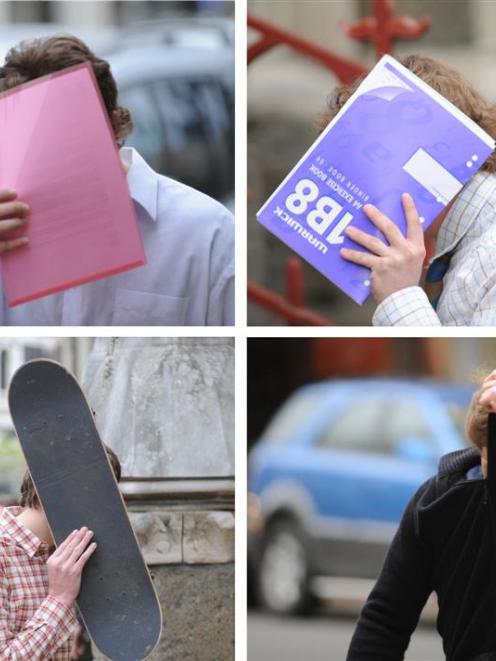 Males attending the Dunedin District Court yesterday, after being charged following last weekend's Undie 500 disorder, hide their faces in an attempt avoid waiting media. Photos by Stephen Jaquiery.
Police warn they are likely to make more arrests next week after they review footage of the Undie 500 disorder in Dunedin.

The warning came as another 39 people arrested during the disorder, some accompanied by their parents, reported to the Dunedin District Court yesterday, bringing the total moving through the justice system following the event to 59.

The tally includes three high school pupils, two from Dunedin and one from Napier.

Dunedin area police commander Inspector Dave Campbell warned more would follow as he had assigned a team of officers to review police video footage, still photographs and other evidence, to identify others involved.

"The officers will be directed to concentrate on those throwing missiles and lighting fires."

The inquiries should not come as a surprise to those involved as they were warned before the event police would come down hard on law-breakers, he said.

The University of Otago suspended three students for a term after identifying them in video footage of the toga parade in George St this year, which also had descended into disorder.

Charges against four people were withdrawn by police before and during court proceedings this week because of insufficient evidence.

Four of the remaining 59 have already been convicted and were fined after pleading guilty - three to breaching the Dunedin City Council's temporary North Dunedin liquor ban, and one to stealing a police officer's hat.

Judge Paul Kellar told the student who stole the police hat that he would pay for his "moment of gross stupidity" for the rest of his life.

His conviction for theft could affect his ability to travel and his career.

The remaining people mainly received registrar's adjournments to October 1 or 2.

Of those charged, 26 were from Otago University and eight from Canterbury University.

Others came from Lincoln and Victoria Universities, the Otago Polytechnic and Telford Rural Polytechnic.

Most of the charges were for breaching the liquor ban, intentionally obstructing police officers, and disorderly behaviour.

One of the high school pupils is charged with one of the more serious charges laid so far, that of assaulting a police officer with a bottle.