Mornington attack: 'All I saw was blood' 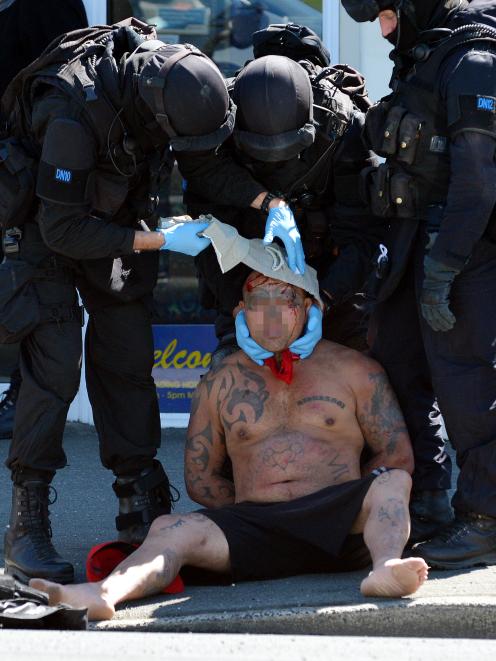 Members of the Dunedin armed offenders squad provide first aid to a man in Princes St, Dunedin, yesterday afternoon. Photo by staff photographer.
A man hit with a golf club yesterday and then kicked while he lay on the ground in the Dunedin suburb of Mornington remains in Dunedin Hospital today under police guard.

The 35-year-old remains in a stable condition after receiving a head injury.

The Dunedin CIB is investigating the circumstances around the incident, a police spokeswoman said.

Two teenagers - aged 15 and 17 - have been spoken to in relation to the incident by police.

No decision with regard to charges has yet been made, she said.

Horrified neighbours watched yesterday as the man was attacked in Mornington.

That incident sparked a mass armed police response to Cochrane St about 2pm, with initial reports a firearm may have been brandished.

The almost two-hour manhunt ended when members of the Dunedin armed offenders squad pulled over a white Toyota in Princes St.

A witness said the driver was handcuffed and led from the vehicle. Armed police, including a dog handler, also spoke to a bare-chested man in the passenger seat.

The man was told to step out of the vehicle with his hands out and later sat on the ground hurling abuse at police.

An AOS member supported the man's neck while others patched his bloodied head.

Southern District Command Centre shift commander Senior Sergeant Darryl Lennane said last night a 35-year-old Dunedin man in the vehicle, who was the victim of the earlier golf club assault, was charged with assaulting a female and wilful damage following a domestic incident.

He had been treated in Dunedin Hospital for a 3cm cut to his head.

The other man in the vehicle was arrested on an unrelated cannabis charge.

It was unlikely other people would be charged as a result of the ''fracas''.

A witness to the earlier Cochrane St incident was shocked to see a fight spill out on the normally quiet street.

A man wearing all red and believed to have gang connections was ''hit by a golf club, and then I started calling police'', the witness said.

''He went down on the ground and they were kicking him and hitting him. I just saw heaps of blood from his head ... All I saw was blood.''

Another witness said she saw a firearm presented, but police now believe a firearm was not involved.

The street was cordoned off and several residents, including a women and two teenagers, escorted from the scene.

They were later spoken to by police.

One witness said there had been yelling and swearing coming from the property the day before the incident.

The Otago Boys' High School hostel in Melrose St was locked down about 3pm.

Snr Sgt Lennane said that was a precaution only as ''one of the persons involved in the fracas went to the hostel'' in an attempt to find a staff member he knew.

Police were also called to St Clair Beach following a possible sighting of the bloodied man in the area about 2.45pm.

A St John spokesman said paramedics treated a man in his 30s who had moderate head injuries.