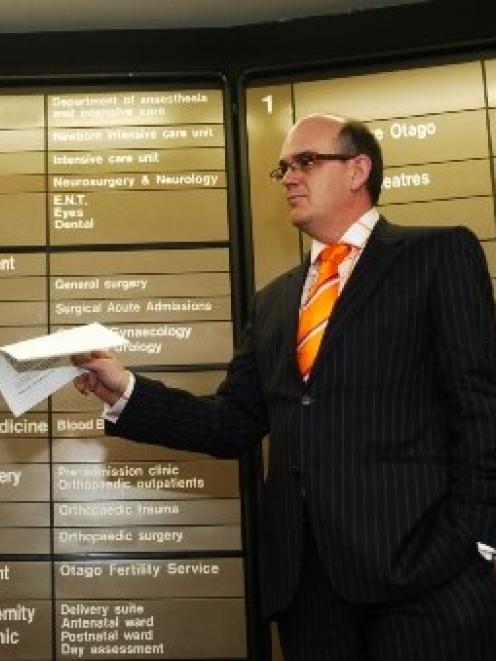 Southern wants two of them to live in Dunedin, while Canterbury wants all six for Christchurch.

In an interview with the Otago Daily Times Mr Ryall said the boards had to "sort it out".

"From my perspective, the last thing people want is a stop-go, on and off again service."

He said he did not have a preferred option, but wanted to make sure that whatever happened, it was safe for patients and that patient lists would not be subject to "the vagaries of one person".

Mr Ryall visited several areas of the hospital, talking to staff, patients and visitors, some of whom used the opportunity to ask him about issues of concern.

Mr Ryall said people had been frank about some issues, with some drawing attention to the lack of spending on hospital facilities over many years.

He had been particularly impressed with the number of staff he encountered who were long-term employees, telling the board members later in some hospitals he visited the average length of service was three months.

At Dunedin Hospital it was not unusual to meet people who had served 25 or 30 years, he said.

Among aspects of the hospital's operation he praised were the falls-prevention programme, public health nurse follow-ups for drunken teenagers and the dramatic cut over eight months in waiting times for non-urgent CT scans.

The emergency department was confident it would be able to meet the target of having 95% of its patients discharged or admitted to a ward within six hours by the middle of next year.

They were getting support from colleagues in the wards, which was the key to success in this area, he said.

Speaking about the issues the southern board faced in trying to reduce its $15 million deficit so it could break even, Mr Ryall acknowledged reducing deficits of boards around the country could not be done overnight and there would be pandemonium if that approach was taken.

Asked if he felt population-based funding was working as well as it could, Mr Ryall said he felt it was the least offensive way of allocating money.

There were factors around it which perhaps needed further attention such as allowance for living in rural areas and increasing the allowance for old-age and dementia-related care, which was "going to be a huge driver" of health expenditure, Mr Ryall said.