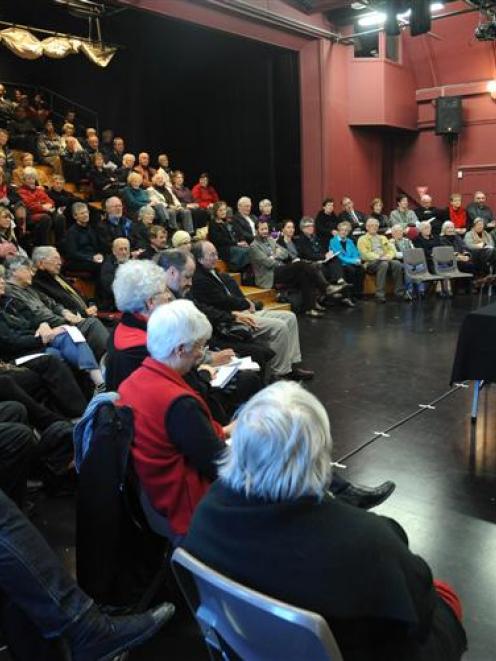 Members of the public attend a panel discussion at the University of Otago. Photo by Peter McIntosh.
New Zealand's high rate of imprisonment and the Government's new "three strikes" law came under fire during a lively panel discussion on crime and punishment in Dunedin last night.

More than 100 members of the public attended the "Public Square" discussion, held at the University of Otago's Allen Hall Theatre, and hosted by the university's Centre for Theology and Public Issues.

The crime and punishment theme clearly struck a raw nerve with some people in attendance, with one interjector angrily claiming "it's racist", at one point during discussion of the "three strikes" law.

Centre director and meeting chairman Prof Andrew Bradstock restored order, and said the meeting could be the first of a series organised by the centre on topics of community interest.

One of the five panelists, Howard League for Penal Reform president Paul O'Neill, of Christchurch, was critical of what he saw as an overly punitive approach adopted by successive governments, given that New Zealand now had the world's second highest rate of imprisonment, behind the United States.

"You put the hopeless in prison and turn them into embittered, hopeless people," he said.

New Zealand was wasting millions of dollars funding more "cages" in which to imprison people, instead of spending money in more productive areas, such as crime prevention.

Criticising the "three strikes" law, he said that preventive detention, allowing for indefinite imprisonment, was already available for the most serious of violent offenders.

He warned that 20,000 New Zealand children now had at least one parent in prison, and those children, "abandoned" by society, were at risk for future crime.

After a member of the public asked panelists to provide another name for the Department of Corrections, another panelist, Dunedin lawyer Anne Stevens, said she would like it to be considered "the Department of Hope".

At times, given some recent law changes, it felt "a bit like the Department of Revenge", she said.

Another panelist, National list MP Michael Woodhouse, said there had not been enough discussion about the victims of crime, and said that although politicians had been criticised during the discussion, they were, in fact, responding to genuine public concerns about crime.

Another panelist, restorative justice facilitator Janet Sim Elder, said "transformative justice" was producing big changes in behaviour by making offenders more aware of the adverse effect of their actions on other people.