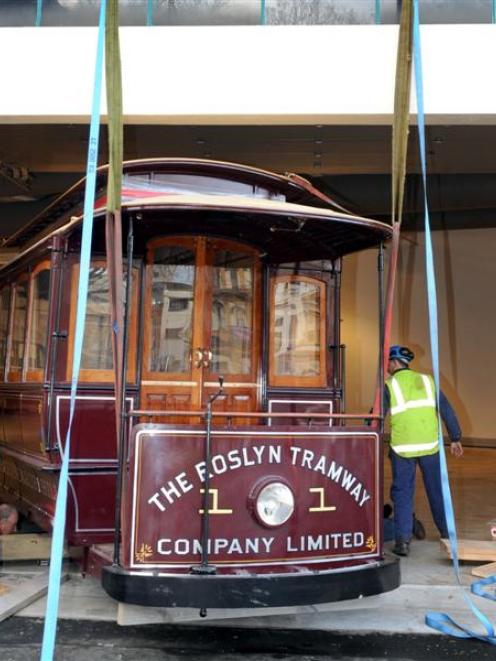 Restored by volunteers at the Heritage Tramways Trust, at Ferrymead, in Christchurch, the No 1 tram came back to the museum by truck.

The once-busy American-built tram arrived in Dunedin in 1900, entering service when the Roslyn-Maori Hill line opened in 1901.

It had not been used as a tram since the line was closed in 1936 and later fell into disrepair. It was used as a crib in Brighton for many years, until the 1970s.

It subsequently became part of the Dunedin Museum of Transport and Technology at Seacliff, before being transferred to the Settlers Museum, though it was never publicly displayed.

That will change when the museum reopens to the public late this year, after its $39 million redevelopment is completed.

Museum exhibitions team leader Jennifer Evans said the tramways trust had done an "exceptionally good" job of restoring and reconstructing the tram and the outcome was "beautiful".

The vehicle will occupy pride of place in one section of the former New Zealand Railways Road Services bus depot building, as part of the museum's 20th century gallery.

"The main thing is people will be able to get in and have a seat. It's great to be able to allow people to do that," Ms Evans said.

Allowing people to climb aboard and look around was part of the more interactive approach being taken by the museum, and visitors would also be able to step inside the recently restored Tiger Tea bus, she said.

• Two of the tram's four original bells are missing, as is the original interior light fitting, and museum officials would like to hear from anyone who knows of their whereabouts.