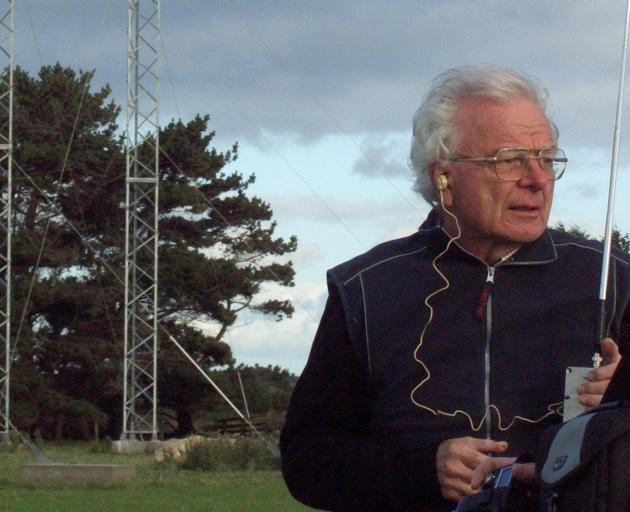 Instead of settling into a quiet retirement, University of Otago geophysicist Emeritus Prof Richard ("Dick") Dowden developed a global lightning detection system later used to make observations from the US space shuttle.

Prof Dowden was one of the foremost geophysicists in Australia and New Zealand, and a former head of the Otago University physics department, in which he was not only an award-winning researcher, but also an influential teacher and PhD supervisor.

He died recently at St Andrew’s Home and Hospital, Dunedin, aged 84, after a short illness. 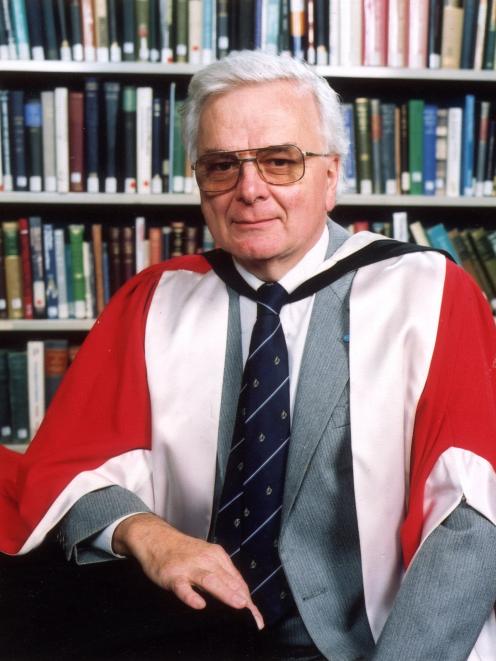 Emeritus Prof Richard Dowden at the time of his retirement from the University of Otago physics department in 1998. Photo: University of Otago.
Geophysics focuses on the physical processes and physical properties of  Earth and its surrounding space environment. Among Prof Dowden’s research interests were red sprites — massive and somewhat enigmatic electrical phenomena in the upper atmosphere.

And he was the first scientist to make ground-based observations of them outside the United States, leading a research group which took video photographs of them in Australia, the land of his birth, in November 1997.

An Otago Daily Times story reported on this "international scientific coup" at the time, with Otago researchers recording 72 images of the giant electrical discharges, above mountains, about 250km south of Darwin.

The  images showed a giant jellyfish-like luminous shape, 30km high and 50km wide, with a dozen "tentacles" extending many kilometres towards the ground, Prof Dowden said.

Shortly after he retired in 1998, Prof Dowden started work on a long-range lightning detection network, which evolved into the World Wide Lightning Location Network. Its acronym "WWLLN" was pronounced "woollen" because of its New Zealand origins.

The underlying fundamental algorithm was developed by Prof Dowden based on his many years of experience.

Needing to place radio receivers throughout the world, he reached out to his international network of contacts, collaborators, and former students. The network quickly gained receivers in Japan, Singapore, the US, South Africa, Hungary and Australia, and is still operating, with hubs in Dunedin and Seattle.

Early in the network’s history it provided information to Nasa to allow it to plan observations from the space shuttle, current Otago physics head Prof Craig Rodger says.

"Nasa was literally changing the orientation of the shuttle so the cameras on the shuttle were pointing where we told them the thunderstorm activity was" during a shuttle mission in the early 2000s, he said.

The shuttle observations were a "big success" and Prof Dowden had also been involved in watching red sprites from the ground in the US and in Australia,  Prof  Rodger said. As a leading   geophysicist in Oceania, he was  involved in organising international scientific meetings in the region, and was the regional editor of the Journal of Atmospheric and Solar Terrestrial Physics (1990-98).

A former Beverly Professor of Physics at Otago, he also received the university’s Michaelis Medal (1984), and was a Fellow and Sidey Medal recipient, in 1997, of the Royal Society of New Zealand, also receiving an Australian Antarctic Division Medal.

Prof Dowden was a former president and Fellow of the New Zealand Institute of Physics, and a former commission chairman, editor-in-chief and vice-president of the International Union of Radio Science;  a Fellow of the American Geophysical Union (2003),  member of the International Aeronautical Academy, a former member of the  Otago Polytechnic Council, and of the Otago Museum Trust Board, and was founding director of Low Frequency Electromagnetic Research Ltd.

In a recent tribute, Associate Prof Neil Thomson, whose PhD was also supervised by Prof Dowden, noted that Otago University had, in 1965, advertised for a new physics professor to succeed Prof Robert Nimmo, who was retiring.

The applicants included Dr Dowden (then  33), from Tasmania, and then Otago physics reader John Newton  Dodd.

Both men were appointed, and in 1966 this ushered in a new era, with the department starting to recruit students to do  PhD study at Otago University, instead of at Oxford or Cambridge universities.

Prof Dowden was at the forefront of these efforts, Prof Thomson said.He was not only an innovator in theoretical study, but also invented his own effective hardware tools to enable him to continue his research.

He quickly became known for his "sparkling scientific innovations both in hardware inventions and in ideas".

Typical of his inventions was his "dynagraph", invented about 50 years ago, which could undertake spectral analysis of taped radio signals up to nearly 40 kilohertz.

It used an ordinary tape recorder, adding only a piece of piano wire, a "small bump glued to the bottom of the capstan wheel", and a modest box of mainly analogue electronics. But it outperformed other existing and more costly devices, and could analyse whole tapes for hours, not just two-minute segments.

Prof Dowden and his students used this device for many years to work on whistlers and other phenomena, also helping produce many publications.

He was the son of civil engineer Noel Dowden and his wife Monica (nee North), and shared his father’s flair for creating equipment to meet practical needs.

Prof Dowden’s family later moved to Sydney, and he was educated at St Ignatius’ College, Riverview, Sydney. He then gained a BSc (Hons) in physics at University of Sydney (1955), before completing an MSc and PhD and later also gaining a DSc, at the University of Tasmania, in Hobart. After leaving Hobart, he worked for a few months at the Radio Physics Division of the CSIRO, in the grounds of Sydney University, and spent a physicist’s year on Macquarie Island with the Australian Antarctic Division. Macquarie is nearly halfway between New Zealand and the Antarctic, and Australia has long maintained a manned scientific base there.

Prof Dowden then worked for the Australian Ionospheric Prediction Service in Tasmania (1957-63), before returning to the University of Tasmania, becoming a lecturer and senior lecturer (1963-66) before moving to Dunedin.

Prof Dowden made contributions in several fields of planetary and geophysics, mostly using electromagnetic theory and techniques. He was involved in fundamental theory, and the understanding and interpretation of electromagnetic signals.His  inventions included the Jupiter polarimeter which suppressed man-made transmissions near 10 megahertz.

One of his earliest significant discoveries was deducing the polarity and longitude of the dipole axis of the magnetic field of Jupiter from 10 megahertz radio bursts. This was in 1963, more than a 10 years before the space probe Pioneer 10 arrived at Jupiter, and the research relied upon state-of-the-art ground-based observations and detailed radio science knowledge.

As a family man, Prof Dowden enjoyed outdoor activities such as camping and canoeing.  Returning to the Otago department after one holiday, he was asked about the break, with his wife Eleanor and eight children and said it had been, in retrospect, a "great holiday" but "a bit hectic at the time". Prof Thomson said Prof Dowden was always "a very kind and considerate person to all staff, students, friends and family". Mrs Dowden had also strongly helped the department, including  turning on "superbly catered social functions".

Prof Dowden was deeply involved in innovative scientific research for at least a decade after his official retirement, and continued to keep physically active, walking and exploring many places in and around Dunedin. His scientific research took him to many countries, including Norway,  Germany and the United States, but in retirement he also took a keen interest in  challenges closer to home.He worked to improve a patch of native bush near his Pine Hill home, removing exotic plants to allow the natives to flourish. Prof Dowden is survived by his wife Eleanor Dowden (nee Widdicombe) and children Tony, Cathy, Andrew, Stephanie, Peter, Anne, Paul and Caroline and 11 grandchildren.