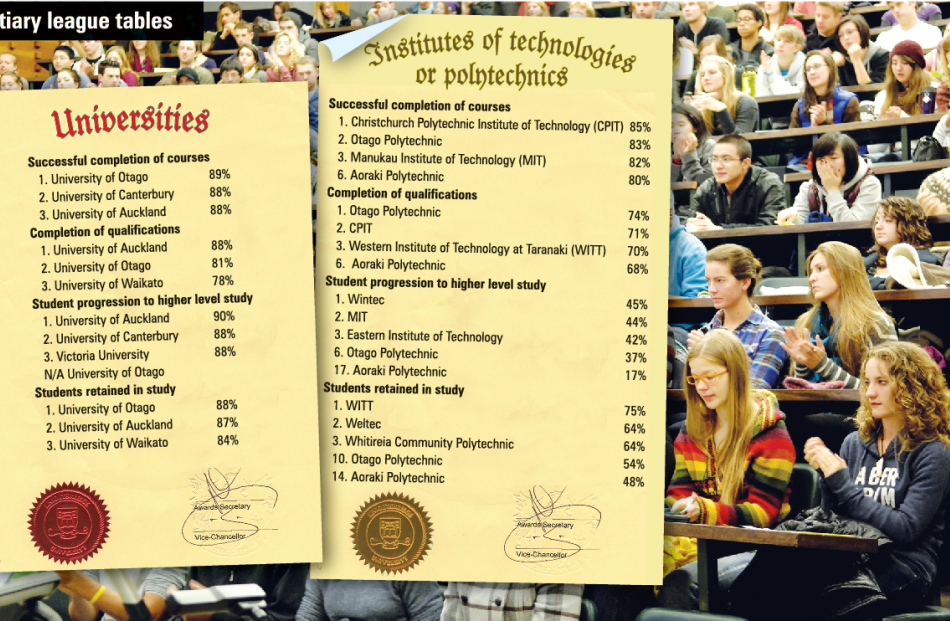 The University of Otago was the top-performing university in two out of four performance areas measured in the latest round of tertiary league tables, and Otago Polytechnic was ranked top in one area.

The University of Otago was the top-ranked university for students completing courses, on 89%, and the number of students retained in study, with 88% either re-enrolling in the university the following year or completing their qualifications.

In terms of the proportion of students completing qualifications, Otago was second on 81%, behind the University of Auckland on 88%.

Otago did not feature in the other category which measured the number of students progressing to higher-level study.

No response from the university was available yesterday.

Otago Polytechnic acting chief executive Mike Collins said the institution's performance in the league tables reflected well on the capability of its staff who were "extremely proud of the work that they do to achieve such results".

"We are delighted with our place at the top of our sector for qualification completion. This is an area we have put significant energy into improving, and we will continue to do so," Mr Collins said.

Aoraki Polytechnic, which has campuses in Timaru, Ashburton, Oamaru, Christchurch and Dunedin, was the sixth-ranked institute of technology or polytechnic in terms of course completion, on 80%, and 68% for qualification completion. With only 17% of students progressing to higher study, Aoraki Polytechnic was the second-worst ranked institute of technology or polytechnic in that performance indicator.

"This is exactly the type of improvement we have been working towards. It shows the tertiary sector is responding to our signals to focus on performance and to deliver better value for taxpayers' money," he said.