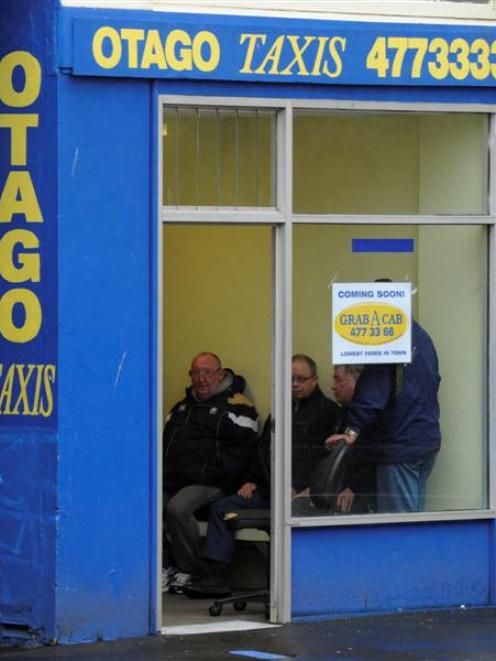 Otago Taxis has ceased operations. It allegedly owes about $15,000 to an Auckland company for camera and monitoring equipment installed to comply with legislation changes in August. Photo by Gerard O'Brien.
New Zealand taxi companies - including two Otago firms - owe about $500,000 to an Auckland business, the company says.

Lintek says it is owed money by taxi companies struggling to pay after installing security cameras and monitoring equipment required under a legislation change made in August.

Lintek managing director Eric Lin said companies in Nelson, Wellington and Dunedin were among the most indebted. His company installed 18 cameras and GPS equipment in Otago Taxis vehicles in August.

The company owed him about $15,000 for the equipment and also for the cost of "round-the-clock" monitoring of the security systems, he said.

Mr Lin said he had notified Otago Taxis on Tuesday evening that Lintek had contracted a debt recovery firm to recoup the company's costs.

"I'm not very happy ... We've given a lot of taxi companies trust after they promised to pay on the day of installation," he said.

Otago Taxis manager Katherine Ritchie could not be contacted yesterday.

It is understood some of the company's drivers intend to start their own taxi firm.

NZTA principal transport officer Dermot Harris said Otago Taxis gave notification on Wednesday it would pull its cabs from Dunedin ranks. Approved taxi organisations had to notify the NZTA in writing when they wanted to surrender their licence, he said.

As far as he knew, the NZTA did not have records of any Dunedin taxi firm surrendering its licence or having it revoked in the past five years.

Mr Lin also said he was owed $20,000 by another Otago firm for unpaid fees relating to the cost of installing equipment, and ongoing payments for 24-hour system monitoring.

The owner and managing director of that company were not available for comment.

New Zealand Taxi Federation Otago spokesman Murray Alcock said it was up to individual companies to ensure they complied with the legislative changes.

Taxi companies around New Zealand had been given about 18 months' notice of the new requirements, which he acknowledged "could be a big hit on any company".

"Everyone's circumstances are different, but you don't like to see any company in an industry fall by the wayside despite being in competition with one another," he said.

Mr Lin said he had supplied equipment to outfit about 2000 taxis around New Zealand centres outside of Auckland.

The law change requiring the installation of the security measures, which applies to taxis operating in Auckland, Hamilton, Tauranga, Rotorua, Gisborne, Napier, Hastings, Palmerston North, New Plymouth, Wanganui, Wellington, Nelson, Dunedin, Queenstown, and Invercargill, was implemented after a spate of attacks on taxi drivers which included the killing of driver Hiren Mohini, who was stabbed to death by a passenger in Auckland last year.