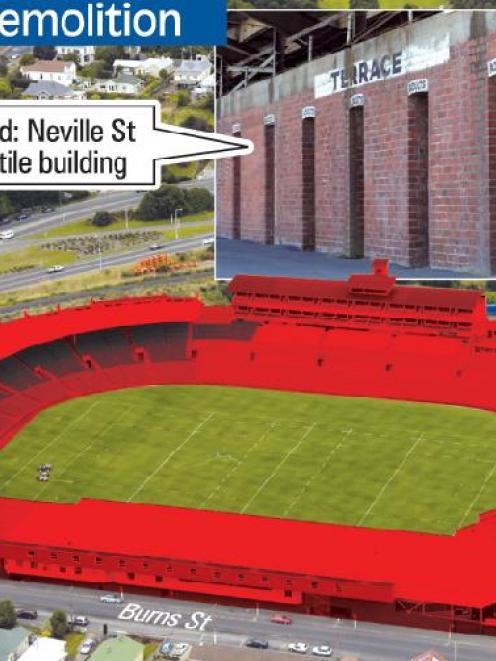 Calder Stewart has plans to demolish almost all of Carisbrook.

The company bought the old stadium from the Dunedin City Council in a conditional deal in February for $3.3 million. Confirmation of the purchase appears to be due next month.

Documents released to the Otago Daily Times yesterday confirmed the company planned to clear almost every structure from the former home of Otago rugby for future development.

Only the Neville St turnstile building would be spared, at least for now, as the Dunedin City Council and the New Zealand Historic Places Trust continue to discuss a covenant to protect the category one-listed structure.

However, the Speight's, Neville St, Rose and Railway stands would be demolished, as would the terrace hospitality complex, built for $4 million in 1994.

The details were spelled out in two building consents issued by council staff to Calder Stewart last month, and released to the ODT yesterday.

Details of the company's plans have not been disclosed, pending confirmation of the agreement, and Calder Stewart staff have so far refused to comment.

Mayor Dave Cull said in February the company was expected to take ''weeks or months'' to confirm its decision to buy the property.

However, documents attached to the consents refer to a four-month time frame to reach a decision, which would give Calder Stewart until next month to conclude the deal.

Mr Cull could not be contacted yesterday and Calder Stewart development director Alan Stewart did not respond to ODT questions.

The consent documentation also showed the demolition work was expected to cost the company $350,000.

The company has released tender documents calling for expressions of interest from other companies interested in the work, as part of detailed due diligence work still under way, the ODT was told yesterday.

New Zealand Historic Places Trust Otago-Southland area manager Owen Graham said last month the trust was talking to the council about a covenant to protect the turnstile building, but not to spare other features of the old ground.

''That's what turns out to be a business decision between the council and the purchaser,'' he said.