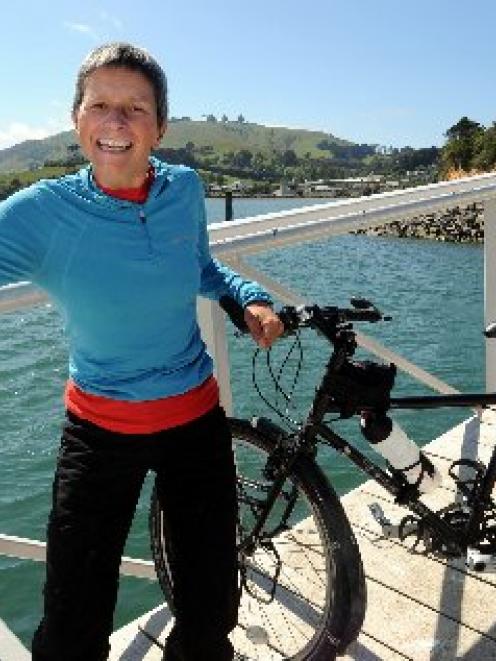 Although she has been travelling largely with no planned route, the one place she was adamant she wanted to go on her world tour was Portobello on the Otago Peninsula. Yesterday, she arrived.

"This was one of the places I was headed for when I left. I wanted to visit my town's namesake. I like having fun and making connections."

The biggest difference between Portobello along the coast of the Firth of Forth, and Portobello on the Otago Peninsula, was penguins, and she was very much looking forward to seeing some yesterday.

"We don't have penguins in Scotland," she noted.

Living the simple life, with all her worldly possessions packed into saddle bags on a bicycle, not knowing where her next stop will be - it's the life she had always wanted.

"I love cycling. At home, I cycle everywhere - to work, to get groceries, when I'm on holidays.

My bicycle is like other people's cars. I spend half my life on a bicycle.

"It's like a bionic leg - it goes everywhere with me."

The former Scottish Government civil servant camps in a tent every night and sleeping in a real bed for her is a luxury.

"It was a dream to travel by bicycle. It's a reminder that we carry so much crap in life.

"I'm amazed how little you need to live and to live well. I like to keep life simple.

"Travelling by bike means you learn you don't need a lot of material things to have a wonderful and fulfilling life."

Despite travelling more than 17,000km, she had only gone through one set of tires and had got just three punctures.

"I got the punctures when I cycled through a forest of big candelabra cacti in South America. The spikes fall on the ground and you pick them up with your tires."

Ms Symaniak said her meandering trip felt self-indulgent, so she is raising funds for Oxfam as she goes. To date, she has raised more than $2500.

Ms Symaniak said she would spend the next two months in New Zealand, and was still thinking about where she would next pitch her tent.

"There's still plenty to see in New Zealand before I think about which country I'll go to next.

"You find yourself stopping somewhere for a couple of days when you only really intended to pass through."

She intended to stay a week in Dunedin before heading to Fiordland, the Otago Central Rail Trail or the West Coast.