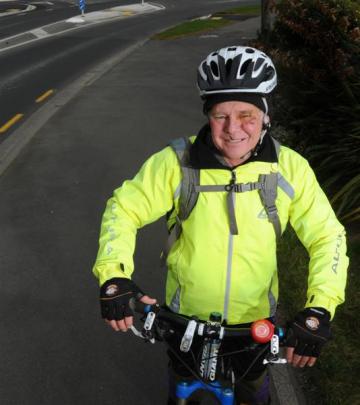 Garth Christensen, who was knocked off his bicycle in a head-on collision with another cyclist on a blind corner on a shared path, says speed limits and centre lines on shared paths could make them safer. Photo by Craig Baxter. 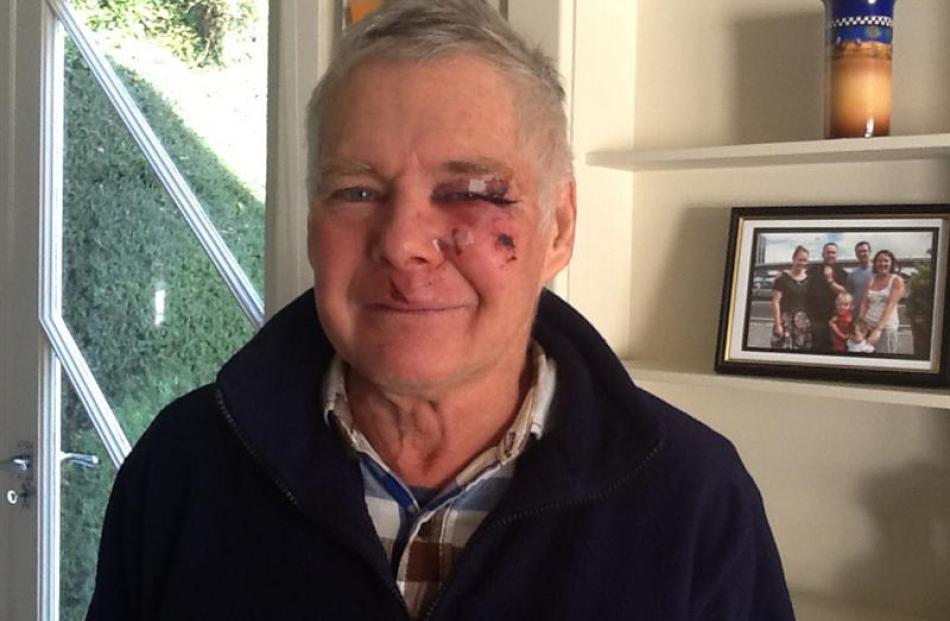 Mr Christensen shortly after the accident.

A Dunedin cyclist smashed into by another cyclist on a shared path last week says his accident was a reminder care still needs to be taken in cycle lanes.

Shared paths were safer than mixing with traffic on the roads, but some median lines separating cyclists and pedestrians might not go amiss, Garth Christensen said.

The 69-year-old suffered a head injury when he was knocked from his bike on the shared path at the corner of Portsmouth Dr and the Andersons Bay inlet causeway about 5.35pm last Thursday. Mr Christensen, who was wearing flashing lights and high-vis gear, did not see the other cyclist coming until the cyclist, who was travelling ''somewhat faster'' then he was, was basically on top of him at the corner.

''My last recollection was a cyclist coming towards me ... and the next was talking to somebody in the ambulance - I was really sort of out of it - and finally someone putting a bandage around me in hospital.''

The retired electrical engineer said he was a keen cyclist who did not own a car and cycled everywhere. He bought his Vauxhall home because it was close to a cycleway. From his house, he saw more and more cyclists ''zooming along'' on the shared path below.

He did not blame the cyclist who ran into him, but thought, as more people were encouraged to cycle, it was a good time to raise awareness about all users taking care on shared paths.

Although he generally felt safer on cycleways than on roads, he had only ever had two crashes, both on cycleways.

''I spend time every year in America and cycleways are dangerous places for bicycles, believe me. ''He wondered if speed limits and median lines might be good ideas for shared paths in Dunedin.

If he was alone or with one other cyclist, he preferred to use shared paths because they were safer and smoother than roads or cycle lanes on roads.

He was always conscious of other users, particularly children, but sometimes found it hard to predict which way a person or cyclist might move as he approached.

If everyone stuck to the left, as on the roads, it would be easier, he said.

There seemed to be no good place for faster cyclists, he said.

''We get abused wherever we are,'' Mr Dunstan said.

Bigger groups would go on the road, but often cycle-lane surfaces there were covered in gravel. Drivers, even once the police, would signal for them to get on the shared paths.

The ideal would be separated two-directional lanes for cyclists, but median lines on shared paths would help, he said.

The chairman of cycling advocacy group Spokes Dunedin, Robert Thompson, also said in his experience shared paths worked best with a centre line on them.

''You get to a point where there's enough people using them [then] you have to make it work for everybody and say ... you keep left and pass on the right, and that should work well for everyone whether they are cyclists or pedestrians.''

It should be a matter of common sense, he said.

He noted the corner where Mr Christensen crashed was a particular issue, because of the poor visibility.

Dunedin City Council senior traffic engineer Ron Minnema said some paths were too narrow to paint a line down, while others had long sightlines, which meant people could see what was coming.

However, he had organised for a median line to be painted on a blind corner of the Shore St shared path this week and would investigate what sounded like a similar issue at the Portobello Rd/Portsmouth Dr bend.

There were road-user rules for shared paths people had to follow, but the idea was largely to ''share with care'', he said.

Rules for use of shared path
• A person using the path must use it in a careful and considerate manner; and not create a hazard to other people using it.

• Cyclists and riders of mobility scooters and skateboards, or other wheeled devices, must not travel at a speed that constitutes a hazard to other people using the path.

• If a sign or marking on the path gives priority to pedestrians or cyclists, users must follow the signalled priority.

• No user may unduly impede the passage of any other user, whatever priority the sign or marking gives.