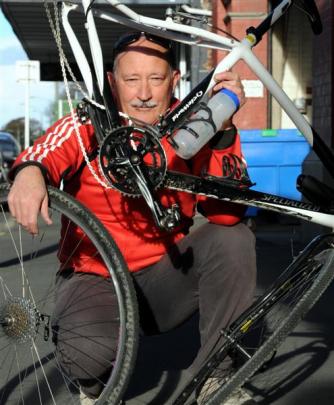 Cyclist Pascal Sutherland holds his bike, which was damaged when a motorist ran over it on Saturday. Photo by Craig Baxter.

Two Dunedin people fear the road is becoming a dangerous place for cyclists following a road-rage incident in Highcliff Rd.

Pascal Sutherland and Louise Kennedy said they were cycling in single-file about noon on Saturday when they were confronted and attacked by an angry motorist.

''This car came up behind us and started beeping at us. It's really scary when people start doing that,'' Ms Kennedy said. They allege the driver became more aggressive and after hurling abuse at the pair, he pulled into a layby and got out of his vehicle.

He allegedly hit Mr Sutherland and the ''whole thing ended up being a s... fight'', she said.

The man got back into his vehicle, which she believed was a Toyota Hilux, and drove over Mr Sutherland's bike.

''Then he put the car in gear and drove right towards me,'' she said.

''I went 'Oh my God, oh my God ... he's coming towards me','' Ms Kennedy said, her voice breaking. She managed to avoid the vehicle but the event had left her ''absolutely terrified''.

Mr Sutherland said it was the first time in 30 years of cycling that ''someone has got out of their car'' and threatened him.

''I'm glad it was me and not my daughter or someone else's son or daughter,'' he said.

''Motorists have no idea how vulnerable cyclists are - and they don't seem to really care.''

He had referred the matter to police, and would not comment on the specifics of the incident, aside from saying: ''It's fine. It's a fat lip.''

Ms Kennedy said she felt the driver was a ''ticking timebomb''.

''This guy's going to kill somebody,'' she said.

''If something's not done ... it's open slather for everybody to carry on like that.''

Motorists' attitudes to cyclists needed to change, she said.

''You can't go around fearing for your life when you are out doing something you enjoy.''

''There is a lot of antagonism towards cyclists at the moment, because of the cycling lanes.''

Senior Sergeant Dave Scott confirmed police had received a complaint about the incident.

"In due course we will be catching up with the owner of the vehicle in question, getting his side of the story and going from there,'' he said.