Practising curtsy injured knee but pain worth it 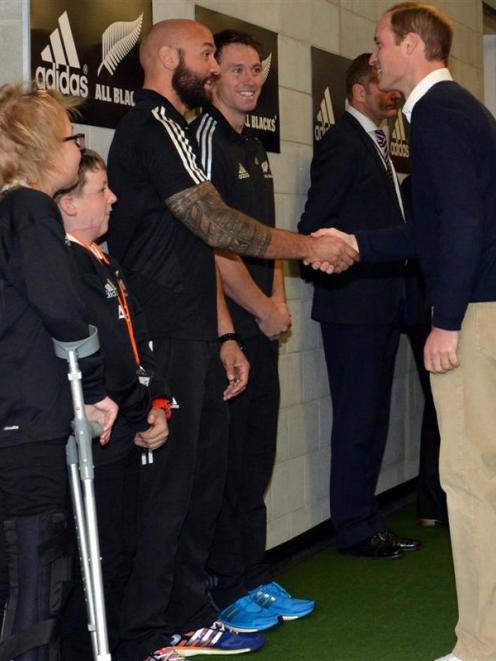 Curekids ambassadors Sophie Newbold and Bradon Warnock-Haynnon (at left) wait their turn to meet Prince William, who is shaking hands with New Zealand men's sevens captain DJ Forbes, watched by All Black Ben Smith. Photo by Peter McIntosh.
A teen who needed major surgery and two weeks' physio to be able to walk out to meet the Duke and Duchess of Cambridge after she damaged her knee practising her curtsy, says all the pain was worth it.

Sophie Newbold was expecting to get to say a quick hello to the Royal couple before they stepped out on the field at a mini Rippa rugby tournament at Dunedin's Forsyth Barr Stadium yesterday, but ended up having quite a chat with Prince William both in the tunnel and on the field.

Miss Newbold said she had been practising her curtsy for weeks.

Then, two weeks ago, as she was bending down, she felt something go ping and her knee gave way.

''I dislocated my kneecap, took some bone off and tore my cartilage and ligaments.''

An ''amazing team'' at Dunedin Hospital had worked ''really hard'' to get her back on her feet in time for the Royal visit, the teen, who was born with cardio-facio-cutaneous (CFC) syndrome, a rare genetic condition that typically affects the heart, facial features and skin, said.

She said the duke and duchess were both ''really lovely''.

She and Prince William had talked about Prince George, the All Blacks, the couple's trip to New Zealand and how beautiful Prince George and his mother were.

Prince William had agreed that his wife and baby were beautiful, she said, and told her they had wished they could have brought George, but they could not this time.

''I would have loved to have seen George,'' she said.

''Kate is so beautiful and she's so nice and it was so lovely to meet her. She said: 'Hello. What have you done to your leg?' and I said I was practising curtsying then my knee just gave away. She said: 'Ow. I hope it gets better soon'.''

It had been an incredible day, Miss Newbold said.