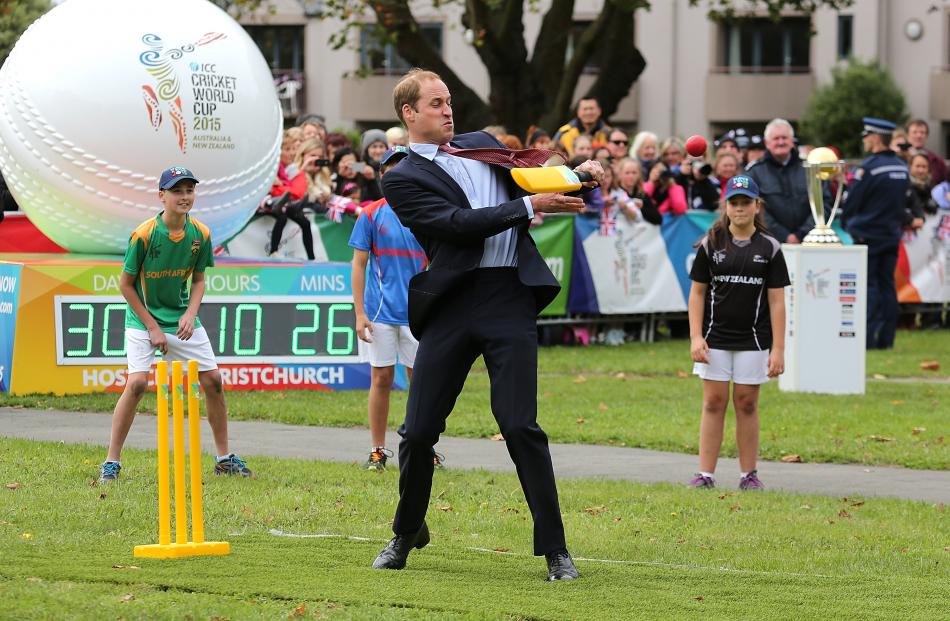 Prince William, Duke of Cambridge plays a game of cricket during a visit to Latimer Square in Christchurch. Photo by Martin Hunter/Getty Images 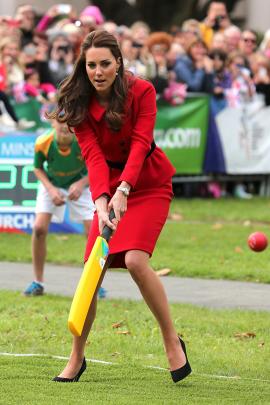 Catherine, Duchess of Cambridge plays a game of cricket during a visit to Latimer Square in Christchurch. Photo by Martin Hunter/Getty Images

Time spent with families of CTV earthquake victims, a visit to Christchurch's Botanical Gardens and a game of cricket with young enthusiasts were some of the highlights of the Duke and Duchess of Cambridge's final day of official activities on this royal tour.

More than 100 relatives of quake victims met the royal pair this morning at the site of the former CTV building, on the corner of Madras and Cashel Streets, as the crowd's mood turned from one of rock-star enthusiasm to remembrance.

Relatives had attached bouquets to a wire fence bordering the site, and many were holding framed photos of their loved ones.

The Duke and Duchess spoke at length to the families. The conversations were cordial, with smiles, rather than tears, marking the occasion.

Ian Foldesi, 64, was killed by falling rocks on the Port Hills.

Mr Foldesi's family brought his labrador dog Tetley, who found his body, to the site.

The dog, which had a Union Jack scarf tied around its neck, had been lying on the grass but leapt up for his royal guests.

The family of Jane-Marie Alberts, 44, at the occasion today included her niece, Summer Oliver, who was injured in the PGC collapse.

The Duke and Duchess were scheduled to meet just four families but the couple chose to cross the grass to meet many more people, including CTV receptionist Mary-Anne Jackson who fled the building just before it collapsed.

Police lined the street and were visible on nearby rooftops, and crowds also gathered down the roads leading to Latimer Square.

Many spectators were wrapped up warm in coats, scarves and thick jumpers in the biting Christchurch cold.

Following their meeting with CTV families, the royal couple split up at Latimer Square to meet the crowd, which was eight-deep in places.

Kate was inundated with gifts for baby George, including toys and a sheep pillow.

Tilly-Belle Robinson, 13, gave the Duchess a book she wrote herself entitled 'George meets the Kiwi'.

"She said she would read it to George tonight," she said.

Around 200 people lined the Botanical Gardens' route, hoping to catch a glimpse of William and Kate as they opened the gardens' new $16.4 million visitor centre.

Beverley Rowe from Clifton travelled to London for the royal wedding in 2011.

She lined up for four hours today before ditching her group. "I really needed the toilet, you see," she said.

"I just watched the ceremony at my hotel."

Then it was time for a spot of cricket in Latimer Square, and former New Zealand stars Sir Richard Hadlee and Debbie Hockley spoke to the couple before the royals took up a bat and ball.

Prince William bowled to his wife who adopted a classic batting stance as the ball flew far to the left, drawing a cry from the crowd.

William next three deliveries to Catherine were more on target, two of which she hit with the plastic yellow bat.

Then it was Will's turn.

"Be nice," the Duke called to a young bowler as he headed to the crease.

"Good ball," he said after missing the first ball.

The second, he hit low and flat.

The Duke then thrilled the crowd with two lofted shots, and managed to escape without being caught.

The couple then formally greeted the 28 young cricketers, from seven city schools, shaking their hands and no doubt sharing some of his new cricketing knowledge.

Then it was off to the Air Force Museum at Wigram, where around 500 Christchurch business people had gathered inside for Future Focus: Christchurch's Redevelopment lunch.

They were sitting at 49 tables in the museum surrounded by old war planes, including an Iroquois military helicopter, and a Douglas C-47B Dakota which carried the Queen on previous royal visits.

The Duke and Duchess of Cambridge arrived to cheers from a large crowd in red, white and blue.

The Prince gave a four-minute speech in which he paid tribute to the city's resilience and looked forward to seeing the city rise again.

He and his wife had "found ourselves moved at just how awful" the February 22, 2011 earthquake was.

Since he last visited, just after the deadly quake, he has been struck by the "resilience and adaptability" of the local people.

Despite the daunting job of rebuilding, Cantabrians have kept their "classic Kiwi humour", he said.

He cited three reasons why Christchurch was not defeated by the natural disaster.

Firstly, "this is your home", secondly, "you all care deeply for Christchurch ... and it's clear you want to do your very best for your city", and the third reason he gave why Christchurch has a strong future, is because the people in the room today had decided to devote their energy, investment, time and skills in rebuilding.

"Christchurch is a city which has chosen not only to survive but to thrive," William said.

"Catherine and I look forward to coming back to see how the city takes shape."

He asked the gathering to join him and his wife in passing on thoughts and prayers to those in the Solomon Islands who have been struck by a similar harrowing experience in recent days.

After the presentation, they tucked in to lunch - a choice of salmon or chicken.

After the lunch, the royals each laid a single red rose at the Wall of Remembrance to pay respects to New Zealand's fallen airmen.

William and Kate also unveiled a new plaque, 'In recognition of all those RNZAF personnel who have served in peacekeeping missions throughout the world since 1948.'

They gave a final wave before they got back into the motorcade set for the airport and a flight back to Wellington, and baby George.

Tonight they are dining on a "quintessentially Kiwi" feast prepared by Ruth Pretty at a dinner with the Prime Minister, his wife Bronagh and son Max.

The dinner has been described as 'private' and Mr Key has kept details sparse until today - but says the taxpayer will be footing the bill.

He said the menu for the dinner at Premier House would "showcase New Zealand" and included Bluff oysters and white bait entrees, followed by a main course of either rack of lamb or snapper. Pudding will be pavlova and hokey pokey icecream.

Mr Key said he expected the Royal couple would be there for a few hours. He did not expect Prince George to be there.

"There is obviously a welcome invitation for him but I'm pretty sure it will be past his bedtime."

Max met William and Catherine when the Key family went to stay with the Queen at Balmoral last year, while Bronagh had accompanied Mr Key to the Royal wedding in 2011 and had also been at Balmoral. Daughter Steffi had not returned for the dinner - she is in France and Mr Key said she was "a bit busy with exams at the moment."

Mr Key said the couple had wanted something relaxed in the programme. He had originally intended to host the royals at his Parnell home, but because they were based in Wellington that had not suited their programme.

Mr Key said he did not know what the cost of the meal was. Ruth Pretty was also one of the caterers for the barbecue for Prince William during his visit in 2010, where he and Mr Key manned the grills to cook the steak.

Mr Key has proposed a referendum on changing the flag, and had signalled he would discuss the issue with the Duke of Cambridge during his visit to New Zealand.

But in the end, it was William himself who raised the issue when the two met on Thursday.

"He asked about the flag, actually. He's probably aware of the debate that's going on," Mr Key told TVNZ's Breakfast this morning.

"I went through all the logic of why we want to do what we're wanting to do, told him it was a referendum, told him people would have to choose."

Mr Key told William public opinion was 50-50 or more in favour of the status quo, "but over time that might change".