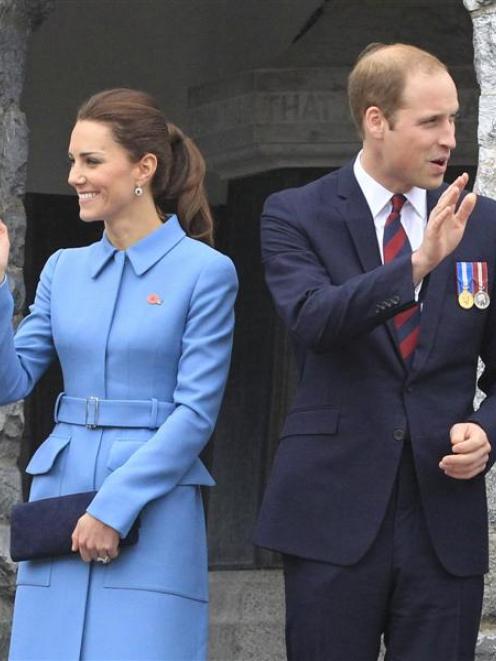 Photo by Derek Flyn/The Marlborough Express.
Will they stop and shake hands with people waiting in the Octagon?

How will they mix wine and jet-boating without a hiccup?

How many changes of wardrobe will the duchess make in a day that includes attending church, playing rugby, wine-tasting and jet-boating?

These and many more questions will be answered in Otago tomorrow, as the province takes its turn to host the Duke and Duchess of Cambridge on their Royal tour of New Zealand.

The couple's first stop of the day, Dunedin, is nearly as polished as the couple themselves after days spent painting over graffiti, trimming verges and scraping gum off pavements in preparation for its day in the international spotlight.

In Queenstown, the (white) wine is on ice and Shotover Jet's drivers will surely be practising 360s in their sleep.

And so Otago awaits the Royals' arrival.

Thousands are expected in the Octagon and along the various motorcade routes, and while they are not expecting any royal walkabouts, no doubt many are hoping the couple will spare a few moments, perhaps in Dunedin after their church service, to chat to some locals.

While 10,000 snapped up tickets to see the Royals at Forsyth Barr Stadium tomorrow indicates more than a few people are keen to get a glimpse of the couple, the city's dollar shops report only a few royal-watchers buying Union Jacks so far.

Perhaps ironically, the Scottish Shop has been doing a steady trade in flags.

Shop owner Erin Hogan is one of those looking forward to the visit. It would make her day, she says, if the duchess, who in Scotland is known as the Countess of Strathearn, wore the Strathearn tartan on her first visit to the Edinburgh of the South.

Otago is expected to put on some of the best weather of the tour, ending the reign of rain for the tour with a cool but dry 11degC forecast for Dunedin tomorrow and an overcast 14degC for Queenstown.

Bring on the royal frenzy.