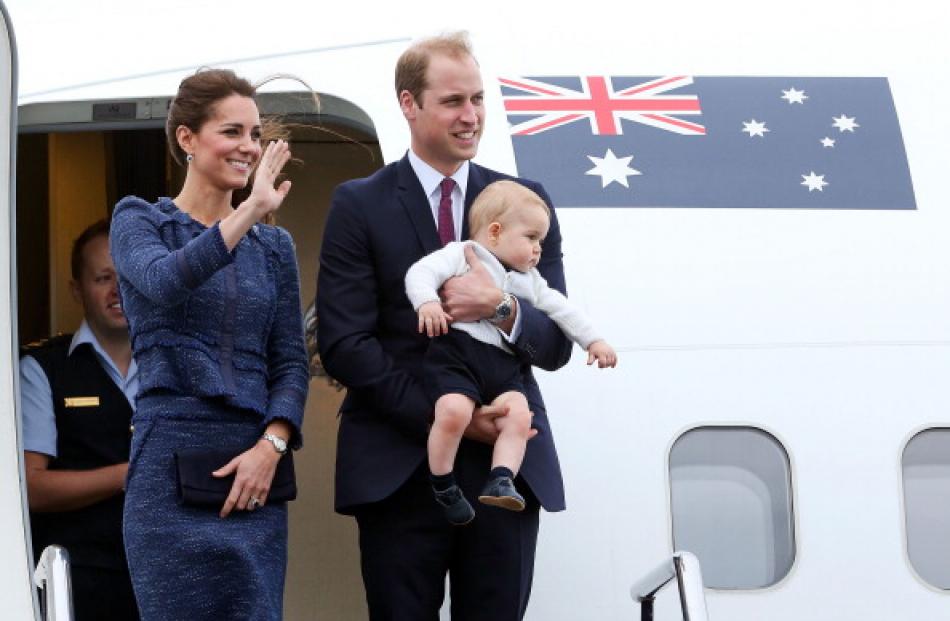 Catherine, Duchess of Cambridge, Prince William, Duke of Cambridge and Prince George of Cambridge wave to the crowd at they depart for Australia. (Photo by Hagen Hopkins/Getty Images)

The sun finally shone on the Duke and Duchess of Cambridge for the last public appearance of their 10-day visit to New Zealand.

Rain has seemingly followed the royal couple on every walkabout of their tour, and today's event at Wellington's Civic Square looked likely to follow suit, with steady rain falling in the capital for most of the morning.

But within half an hour of their arrival around 11.30am, the rain had stopped and the sun peered out from behind the clouds.

The Duke and Duchess were greeted with loud cheers from the thousands gathered at the square, some of whom had been waiting for their arrival since before daybreak.

Accompanied by Wellington Mayor Celia Wade-Brown, William and Catherine stopped to chat to fans before being greeted by four little girls - one dressed in white as a princess - who handed them bouquets of flowers.

The couple then signed a visitors book at the Wellington Town Hall before taking their time to greet people in the sunshine, seemingly enjoying the chance to meet people without needing an umbrella.

One fan asked Prince William, dressed in a navy suit and red tie, when he would be having another baby, to which he replied: "Oh you never know, give it time.''

The Duchess - wearing a navy blue tweed suit by New Zealand designer Rebecca Taylor and navy suede Alexander McQueen pumps - took her time to chat mainly to children as she greeted the crowd.

Her wet morning showed in her nude stockings _ their heels were dyed blue from her sodden shoes.

By the end of the walkabout, William's wrists were laden with coloured friendship bracelets given to him by ardent admirers. Kate also sported a black and neon yellow bracelet.

One little girl who caught both royals' attention was Upper Hutt 11-month-old Ruby Cate Blitz, who was wearing a T-shirt that read "Marry me George''.

Prince William chatted to Ruby's parents and asked for her name, telling them: "She's absolutely beautiful''.

Catherine was standing nearby, and William called his wife over.

At the end of their walk, the Duke and Duchess waved to people watching from the city to sea bridge before entering a limousine to make their way to the airport, where they were due to depart New Zealand this afternoon.

Minutes later, seemingly on cue, the clouds rolled in again and a light drizzle began to fall.

Earlier, Ms Wade-Brown and council staff broke out the council tea trolley and handed out around 500 cups of hot tea, coffee and Milo to the crowds in Civic Square.

Among those waiting to catch a glimpse of the royal couple were a group of Samuel Marsden Collegiate students who had been standing in the dark with a tarpaulin since 6am.

The girls, who had taken sick leave to see the royals, were drenched but stuck around because "we're die-hard royalists''.

It squelched when they walked but it would all be worth it, they said.

The weather was true to form at the royal couple's visit to the Royal New Zealand Police College in Porirua earlier this morning, as thunder echoed around the hills and lightning flashed.

Hundreds of royal fans waited patiently in the rain before they were met with a karakia by the police kapa haka group.

The Duke and Duchess were sheltered by umbrellas as the heavens opened at the grounds.

Prince William and Catherine took time at the Memorial Wall to acknowledge police killed on duty and laid a wreath at the wall.

They then headed to the police gymnasium for a demonstration by some of the staff. They also took time to meet young police dogs and the dogs' foster families.

"Who's this then'', asked Catherine as she was introduced to Winta, a German Shepherd puppy fostered by Weallean family.

She and William then asked about the puppy's needs and how much exercise it needed.

Catherine was particularly concerned about the dog's eating habits.

"Do they eat all your shoes?'' she asked.

The pair moved on to the next family - the Boles and their foster pup Gessy. Eight-year-old Morgan handed Kate a toy puppy for Prince George.

As the royals walked through to the dining hall the kapa haka group began singing "I'm singing in the rain''.

On the way into the reception area of the Police College to sign the visitors' book, Prince William was shown a photo of his father Prince Charles opening the college in 1981.

Before signing the book the pair met Iris Pouao, a 7-year-old girl who's just finished chemotherapy for a brain tumour.

Iris handed the Duchess a bouquet.

William and Kate asked the family about school, and Iris' birthday yesterday.

The couple and Prince George then headed to the military terminal at Wellington Airport to fly to Sydney for the Australian leg of their tour.

A crowded greeted them with a cheer as they stepped onto the tarmac.

They stopped and spoke with waiting crew before boarding the plane and giving a final wave.

The Royal Australian Air Force plane took off from Wellington Airport at 1.11pm.