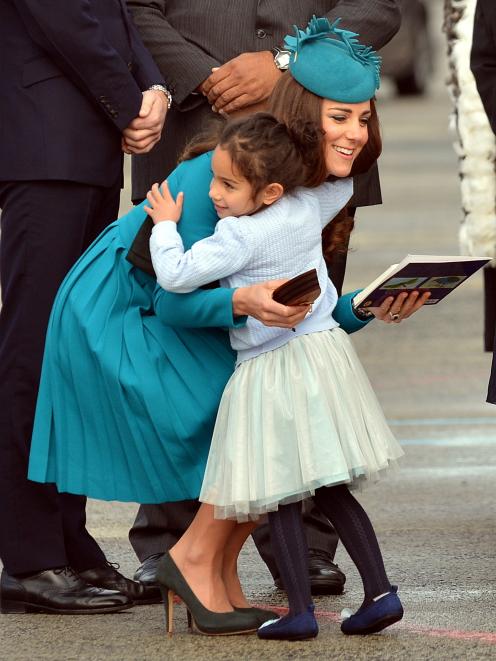 The last in a line of Ngai Tahu representatives to greet the couple, Mataawhio took part in a traditional hongi with the princess before asking if she could have a hug.

''That is just her. She is quite a precocious little girl,'' proud grandmother Donna Matahaere-Atariki, who was keeping a watchful eye behind Mataawhio, said.

''She was under strict instructions to listen,'' she said.

Seizing the opportunity following the hongi, Mataawhio asked for a hug and was given a long cuddle with the visibly delighted duchess.

And her highlight?''Meeting Princess Kate,'' she said.

Mataawhio also gave two books for Prince George, including The Little Yellow Digger and one on Maori colours.

She had also been practising to curtsy, received advice from her ballet teacher and had some last minute preparations with cousin Ripeka Potiki (7) at the Dunedin International Airport terminal.

Earlier, a crowd of several hundred people cheered as the Royal New Zealand Air Force plane touched down about 9.30am. The biggest cheer of the day was reserved for the appearance of the duchess.

Wearing an aquamarine dress by United Kingdom-based New Zealand designer, Emilia Wickstead, the duchess timed her walk down the stairs as the first rays of sunlight lit up an otherwise dull Dunedin day.

Bagpipes greeted the Royal couple before they were welcomed by a traditional Ngai Tahu mihi whakatau led by Otakou elder Edward Ellison.

''They were a gracious couple, and inspirational to the people young and old.''

The duke told Mr Ellison the grey weather reminded him of Edinburgh, and thanked him for the welcome.

Waiting to see the couple was Gina Cosgrove and her daughter Chelsea, of Invercargill, who arrived at Dunedin airport at 8pm on Saturday.

''I was a big fan of Diana and Charles, but now it is Kate and William.''

Other early morning arrivals included Sherie Wright, Rachel Black and Meg Eade, all from Haast, who travelled through the night to be at the airport by 5.30am.

The intrepid trio were lined up at the tarmac even before security arrived to put up the temporary barriers.

The throngs of wellwishers were separated from the nine-car motorcade by makeshift barriers wrapped with Union Jack bunting sent from Rebecca Mathieson's England-based mother.

''They just made it look a bit better,'' she said.