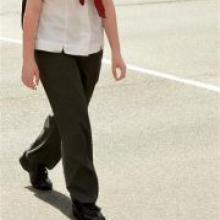 Arryn (15) was allowed by Kavanagh College to change uniform. Photo by Stephen Jaquiery.
A 15-year-old Kavanagh College pupil who identifies as neither male nor female has been a "little surprised'' at just how supportive the Dunedin Catholic school has been.

During the last term of last year Arryn, who identifies as "non-binary'' and asks to be referred to using the pronouns they, their and them instead of he or she, changed uniform and stopped being called Erin.

All this happened with the school's support and Arryn, whose parents asked their last name not be used, was "a little surprised'' at just how willing the school was to let them wear boys' pants and the girls' uniform's top half.

"They were really OK with it.

"My mum and I drafted up a letter and we just went and delivered it to [Steve] Read, the deputy principal, and they just said ‘yeah, that's OK; you can start whenever'.''

There had not been any bullying since the change in uniform, but coming out as non-binary had been a "little difficult'' nevertheless.

This included a few friends taking a little while to get used to it.

"I feel like they have bad reactions because they just don't know much about it and there is the whole stigma that it's a fake, made-up thing.

"But I sat down with them and had a long talk and eventually they were just like ‘OK, this is how you identify and that's fine'.''

There was also the problem of getting people to use the correct pronouns "because not many people are used to that and it seems really weird in the English language''.

"I've had the occasional question about like ‘are you a girl or a boy' and you get that awkward ‘well I am sorta neither'.''

Arryn would also prefer if unisex bathrooms were available.

"I use the girls' bathrooms because I think I would feel even more awkward going to the boys' ones.''

The decision to change uniforms was not something that happened overnight.

"I never really gave too much thought to gender while I was really young, but I guess I was about 11 when I found out a bunch of different things.

"I was very young when I knew that I wasn't straight and I'd gone looking for [information] on that and through looking for different sexualities online I came across all these different gender identities.

"It took me a while, but I eventually found one that I fitted into and [non-binary] just felt right.''

Arryn's mother, Keely, said the school had been "absolutely brilliant'' and concerns Arryn would be bullied after changing uniform were not realised.

"The school has been really accepting, really wonderful with it.''

Her advice to other parents with children who did not identify as either he or she was to "listen to what your child wants'' and contact support groups if things were a struggle.

"I would just say go with your child. It doesn't change who they are as a person.

"It's just a name and a pronoun. They are still the same person underneath.''

Mr Read said Kavanagh College's decision to be accepting fitted with its core values of service, respect, justice and truth.

"I guess justice and respect are the two that sit around this issue.

"People don't choose this path. They are born into it and feel like they are in the wrong gender and we need to respect that difference.''

Mr Read accepted there would be some in the Catholic community who were against the school's stance.

"Whereas we would say we are all made in God's image ... and therefore we should be being supportive and respectful.''