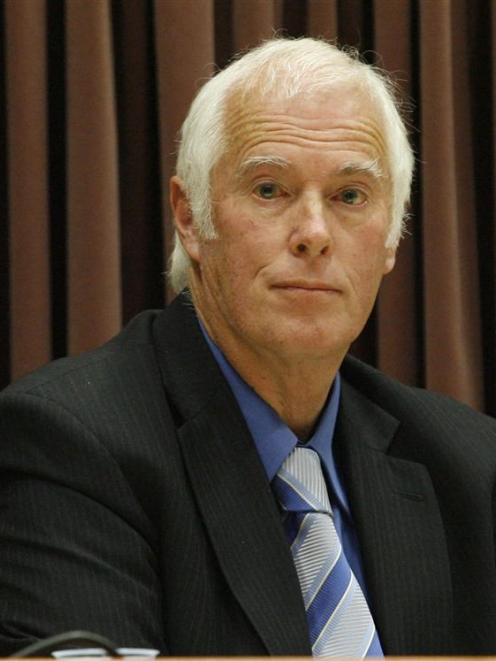 Defence witness Patrick Crowley, of Special Education Services, giving evidence at the retrial of David Bain in the High Court, Christchurch. Photo Pool.
Violent and disturbing stories written by Taieri Beach School pupils were published in the school newsletter distributed only four days before the school's principal was shot, the Bain retrial jury has heard.

Yesterday, the jury hearing Bain's retrial was told of the concern educational psychologists and fellow school principals felt when the three particular stories were drawn to their attention in the days after the Bain family shootings.

He believed the stories should never have been published and distributed to the community, but that decision would have been the principal's.

The court heard the page containing the stories had a "Reader warning", saying "some of the content may be disturbing to adult viewers".

One story was about a boy who crashed his big, red motorbike then went home, got his gun and "shot 100 cops" before "bombing the cop shop".

The writer, a 9-year-old boy wrote about the boy "knocking off a TV" before he "shot his mum".

That was described as "fun" so the boy shot his dad "and that was funnier".

Then "the cops came and put him back in jail".

Another story written by two girls was about a porcelain doll.

Each night the girl who owned the doll heard screaming.

The first night she found her father with "a rifle stuck through his head".

The next night, the mother had a knife "stuck through her heart", then the sister was stabbed "through the leg and heart 10 times", the brother was shot through the head and the heart and on the final night, the girl's baby sister's head was smashed.

After each killing, the girl noticed the porcelain doll had a fingernail missing.

Cross-examined by Kieran Raftery, Mr Crowley said he had not heard of a horror film called The Doll with Purple Nails, about a girl who gets a porcelain doll with purple nails and the next morning, her mother is dead and the doll "is missing a nail".

If one of his pupils had written something like that, "I'd be talking to the child to see what was behind it," Mr MacKenzie said. He would not have sent out such stories in a school newsletter and could not believe a principal would do that.

"It's not a rational thing", he told the court, describing it as "totally weird and unprofessional".

He did not know of any principal who would publish such stories.

"If they did, I'd have a major concern about their mental health."

To Mr Raftery, Mr MacKenzie agreed he knew nothing about the children who wrote the stories.

He agreed there were some "shocking horror films" on television at times when children should not be watching.

Mrs Davidson said that, as a parent, she would have been "furious" to have received such writing.

She was also concerned the porcelain doll story appeared to have "obvious adult input".

Educational psychologists Cyril Wilden and Maryanne Pease spoke of how disturbing they found not only the stories but the fact they had been published in a newsletter going to the wider community.

Mr Wilden said it appeared the children had been watching adult movies and had put together a story "totally unsuitable" to be published at the Taieri Beach School.

Some of the children there had been through the Aramoana shootings several years earlier.

The stories went "beyond black humour", Mr Wilden said, and he thought there could be "some linkage" with the June 20 shootings, as the newsletter was sent out the previous Thursday.

To Mr Raftery, Mr Wilden said he had discussed his concerns with colleagues but had not been in a position to follow up on them.

It was not his role to do so - that was left to the parents and the school.

Ms Pease said she felt publication of the stories was damaging, not only for the children who wrote them but also for the teachers and parents, as other parents and members of the community would be making judgements.