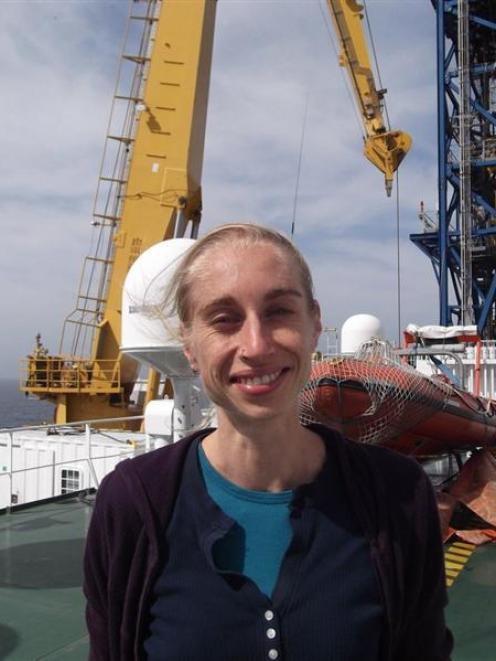 University of Otago geologist Dr Virginia Toy on board the scientific drilling vessel Chikyu. Photo by Christie Rower.
Dunedin scientist Dr Virginia Toy is on a research vessel which has set a international drilling depth record off the Japanese coast, as researchers strive to discover more about causes of last year's massive tsunami.

The research vessel Chikyu last week drilled to about 7740m below sea level and about 850m into underlying rock in a deep-sea trench area, about 6910m deep, off the Japanese east coast.

The drilling site for "Expedition 343: Japan Trench Fast Drilling Project" is about 200km east of the Oshika Peninsula, in northeast Honshu.

Dr Toy, of the Otago University geology department, said expedition staff had already drilled through the subduction zone fault which was active in the magnitude-9 quake which generated last year's tsunami.

The March 11 earthquake - one of the four or five most powerful quakes in the world since 1900- resulted in more than 20,000 people dying in Japan, mainly as a result of a tsunami which caused massive damage, particularly on the northeast coast of Honshu, Japan's main island.

The international research team members aboard were "really excited" with recent good progress, and there was also "a sense of awe and responsibility toward the Japanese people".

"We are really breaking new ground both figuratively and literally," she said.

Late last week, drillers reached the maximum depth of the first of two planned boreholes, at about 7740m below sea level, and are preparing to drill a second hole.

Earlier that week, the expedition had already, at 7060m, set a record for the "longest drill stem" - length of drill pipe beneath the ship and into the rock at depth - achieved on a maritime scientific drilling operation.

This was also a petroleum industry record for drill string length in riser-less drilling- a type of drilling which did not use a fully enclosed system at depth, she said.

High winds and waves of up to 14m had earlier hit the ship, causing some seasickness and initial drilling delays in the "extremely challenging" project.

The 212m-long Chikyu, which is operated by the Japan Agency for Marine-Earth Science and Technology, had left port south of Tokyo on April 1.