By Daisy Hudson
1 Comment
Croquet, skipping ropes and competitive biscuit dunking were the order of the day at a high tea with a Victorian twist in Dunedin yesterday.

About 20 members of the Dunedin Steampunk Society made the most of a sunny Sunday in the Dunedin Botanic Garden.

Decked out in their vintage best, the group attracted plenty of attention from the hundreds of cruise ship passengers visiting the garden.

Society president James Bryan said they were playing games such as croquet and skipping because they were "games kids used to play". 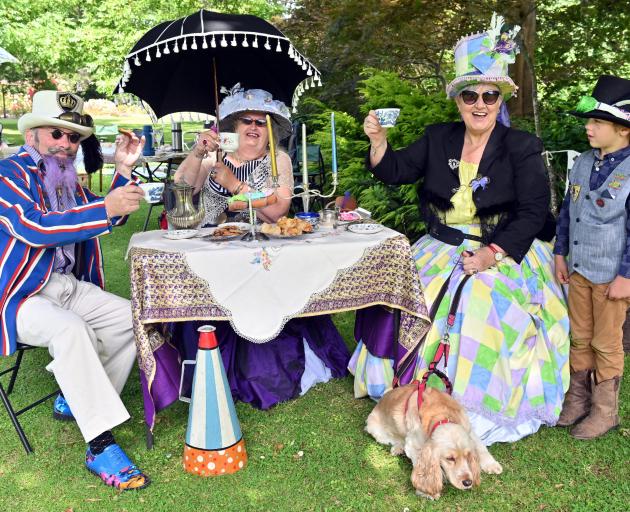 Enjoying the Dunedin Steampunk Society high tea at the Dunedin Botanic Garden yesterday are (from left) James and Helen Bryan, of Dunedin, Chris McKay, of Mosgiel, with cocker spaniel Liesl, and Reuben Brown (6), of Dunedin. PHOTO: LINDA ROBERTSON
Then there was tea duelling: adversaries dunked their biscuits into their teas for five seconds, then took them out and held them up to see whose could stay upright without crumbling the longest.

The group hosted three or four high teas a year, often at the Mornington Cable Car.

"We just do it because it’s fun, and it gives people something to talk about."

There were 27 members of the society in Dunedin, he said.

Love it long may it last