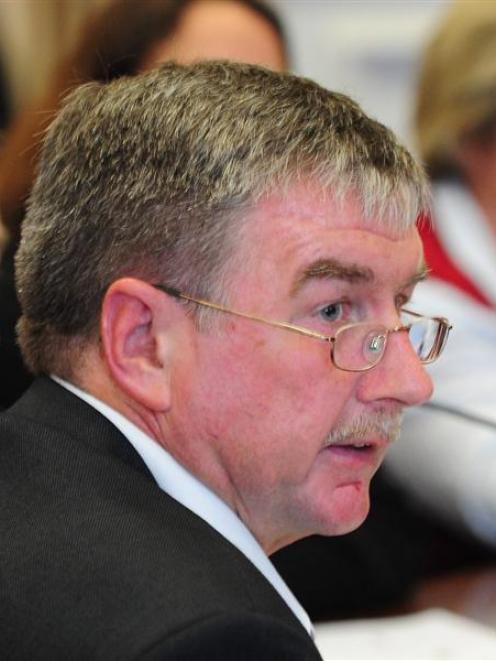 Mr Soper says internal reviews of the board's information technology area were done over several years, but audit investigations specifically into Swann were not sought because such action could have prompted a personal grievance claim.

The extent of Swann's scam - which reaped him and accomplice Kerry Harford $16.9 million over six years - has left many people surprised that Audit New Zealand, an internal audit committee of the health board, and other internal auditors did not seek detailed information on 198 IT-related invoices, including several in the $200,000 to $300,000 range.

Swann had permission to sign for $200,000 worth of spending a year.

In an interview yesterday, Mr Soper said he was aware of questions being asked about the matter.

"How could you not notice $17 million over six years? When you look at the total expenditure of the hospital over that period, it was probably $1.4 billion," he said.

Mr Soper, who was employed at the health board from 1998 to 2003, yesterday said he was not shown a letter warning the board about employing Swann, and was only "briefed" and shown Swann's liquidation paperwork.

Former Audit NZ external audit director Bruce Robertson is reported in the documents to have said he was not made aware of Swann's past during Audit NZ audits in the early 2000s - and would have expected to have been told.

Many messages were this week left with Mr Robertson, who did not respond.

A spokeswoman for the Auditor-general's Office, where he now works, said it would be "inappropriate" for him to comment.

Mr Soper said of Mr Robertson's recollection of not being made aware of Swann's past: "That's probably fair.

When we spoke to Audit NZ, we asked them to pay particular attention to IT. [However] they were not looking for fraud but system performance."

Mr Soper was asked if there was a specific occasion when internal auditors, Audit NZ or finance people were asked to look directly at Swann.

"Finance staff under my direction would have had a quiet check from time to time, so all of those reviews would have occurred in that period.

Again, just quietly in the background, because you've got no basis for doing it."

Other than the Government audit, Mr Soper said there was no record of those reviews, either as minutes or reports.

"You have to be quite careful.

You are actually, potentially, making allegations about somebody.

If he got wind of it, then he could have a crack at you for a personal grievance," Mr Soper said.

Mr Soper talked to Swann about the letter "so that he knew that I knew" of the dishonesty allegations.

Mr Soper's subsequent precautions, "a policy and strategy", were to lease computing hardware, so they were accounted for on their return and could not be traded.

The software applications had no risk and the rest of [the IT] budget was staffing".

"My only summation from that [warning letter] was that if there was an opportunity for him to gain through buying and selling gear, and somehow getting an advantage through that, that was the risk," Mr Soper said.

Sixteen contracts with a company called Sonnford became central evidence at the trial but Mr Soper said he "didn't think it has ever been proven there were contracts in existence" to be scrutinised.

The question of the Sonnford invoices and subsequent payments were "part of the accounts-payable process".

When asked where Sonnford invoices would appear, Mr Soper said: "They would have had to be coded somewhere in the system; I don't know.

I never saw them so I assume they sat in IT."

Annual IT budgets were "flat" and trending downward, indicating the IT budget was "contained . . . when you could have expected it to be rising".

Monthly financial reports were used throughout the hospital departments and "there were no obvious [IT department] variances there, either", Mr Soper said.

"When the story broke and numbers came out, I could never really relate to the gap; how it could happen inside that [$6 million] number," Mr Soper said.

The documents given to the ODT state that Mr Black, in an interview with a lawyer in December 2006, said one of Mr Soper's five specific responsibilities in the wake of the warning letter was to advise Audit New Zealand about Swann: "Audit New Zealand, the statutory external auditors of the hospital, to be informed of the advice received about Swann and the resulting management precautions being pursued."

Mr Black was told Mr Soper had carried out the five duties, but nothing was recorded in writing.

Mr Black had "trusted [Mr] Soper that he would do what needed to be done", the lawyer's note said.

When asked, Mr Soper said yesterday he did not dispute any of the five duties to which the note referred, nor Mr Black's subsequent understanding they had been fulfilled.

"Those five actions probably took place, but they didn't take place a week after Ross [Black] or Bruce [Gollop, acting chief executive] spoke to me; they took place over the next two to three years," he said.

Also, the five duties "may well have have been ticked off several times" in forthcoming years by internal auditors, Audit NZ and finance people.