By Daisy Hudson
0 Comments
When it comes to Halloween, St Kilda has you sorted for all of your arach-needs.

As well as providing some spooky fun for passersby, the decorations also serve a good cause.

On Sunday a night market will be held at the house to raise funds for the Community Organisation Refugee Sponsorship, which enables New Zealand-based community organisations to sponsor refugees for resettlement. 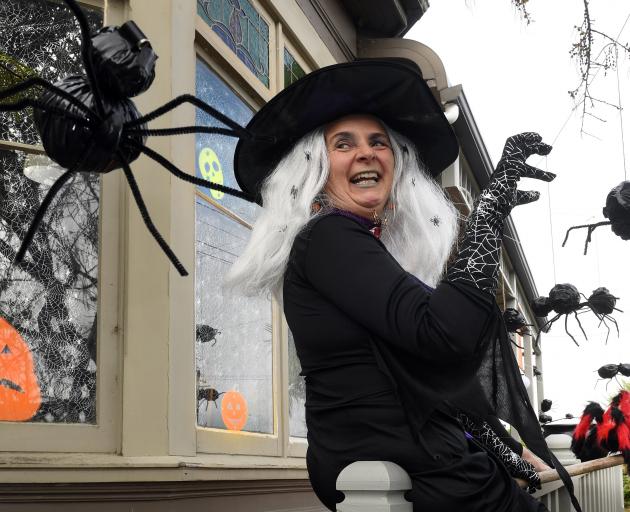 Kirsteen McLay-Knopp has transformed her St Kilda home into a Halloween-lover’s heaven. PHOTO: STEPHEN JAQUIERY
Mrs McLay-Knopp said after previous efforts had been scuttled by Covid-19, the goal was to bring families to New Zealand next year.

Her love of Halloween began back when she was teaching in Japan, and her students wanted her to celebrate the occasion.

She then continued the tradition with her family, decorating their house with a spooky theme each year.

‘‘It’s the only thing where you get to dress up, really,’’ she said.

Past themes had included Ancient Egypt and Day of the Dead.

This year she had decided to go with a spider theme.

She had built up a large collection of Halloween decorations over the years, and this year, inspired by her children making poi at school, also created spider decorations by stuffing rubbish bags.

The night market, which will include food and stalls, will take place from 7pm-10pm at 21 Royal Cres.

Covid-19 protocols would be in place, including QR codes for scanning in and a mask requirement for adults.