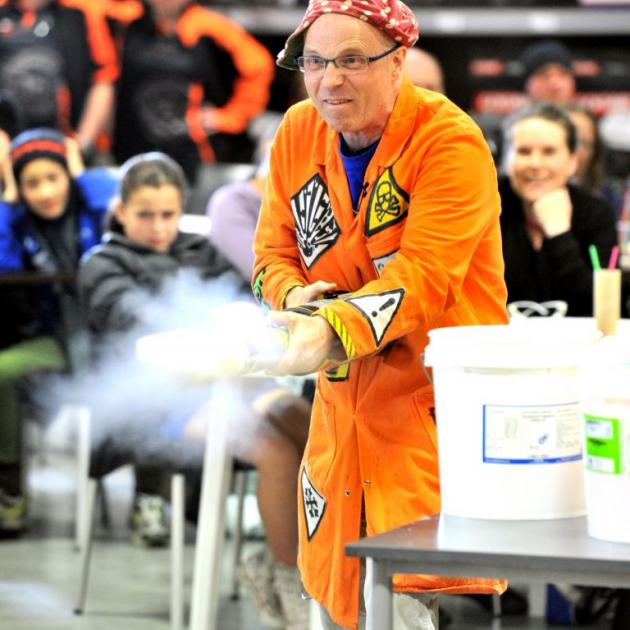 Scientist Tom Pringle, aka Dr Bunhead, on his way to breaking the Guinness World Record for firing potatoes out of a bazooka, in South Dunedin last night. Photo by Linda Robertson
Mashed spuds were the order of the day in Dunedin last night. Stunt scientist Tom Pringle, aka Dr Bunhead, claimed a Guinness World Record, by using a potato bazooka to fire a crop of nine potatoes through a tennis racquet in three minutes.

''It's the most amazing feeling. But, it was also incredibly nerve-racking,'' he admitted after breaking the record with just a second to spare.

The explosive experiment at Mitre 10 Mega was part of the 2014 New Zealand International Science Festival.

Spectators were pre-warned to bring ''ear-defenders, safety goggles and extra-strong underpants'' to the demonstration.

''They're exciting experiments and big, dangerous experiments. They're the sort of experiments you don't get to do at home,'' Dr Pringle said.

The attempt was one potato better than his 2004 world record of shooting eight spuds in three minutes.

''Part of the test is firing the potatoes through a tennis racquet, to quantify the velocity,'' he said.

''A good musketeer could fire three shots a minute, which included loading, firing and cleaning the gun.''

The potatoes reached speeds of up to 320kmh in the demonstration, which has still to be ratified by Guinness World Records.

Two justices of the peace, two stopwatch timers and two video cameras were required to verify the feat.

The Plymouth-born educator has an international reputation for his dramatic science shows and tours the world startling and fascinating children and adults.

''Science can be dull, or it can be fascinating. It's about the delivery and talking about stuff people are interested in,'' he said.